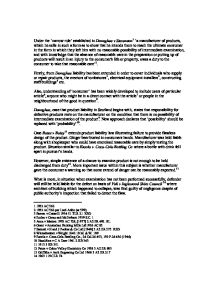 Under the ‘narrow rule’ established in Donoghue v Stevenson[1] ‘a manufacturer of products, which he sells in such a form as to show that he intends them to reach the ultimate consumer in the form in which they left him with no reasonable possibility of intermediate examination, and with knowledge that the absence of reasonable care in the preparation or putting up of products will result in an injury to the consumer's life or property, owes a duty to the consumer to take that reasonable care’[2].

Firstly, from Donoghue liability has been extended in order to cover individuals who supply or repair products, the erectors of tombstones[3], electrical equipment installers[4], constructing staff buildings[5] etc.

Also, understanding of ‘consumer’ has been widely developed to include users of particular article[6], anyone who might be in a direct contact with the article[7] or people in the neighbourhood of the good in question[8].

Donoghue, case that product liability in Scotland begins with, states that responsibility for defective products rests on the manufacturer on the condition that there is no possibility of intermediate examination of the product[9]. New approach declares that ‘possibility’ should be replaced with ‘probability’[10].

However, simple existence of a chance to examine product is not enough to be held discharged from duty[12]. More important issue within this subject is whether manufacturer gave the consumer a warning so that some extend of danger can be reasonably expected.[13]

What is more, in situation when examination has not been performed successfully, defender will still be held liable for the defect on basis of Voli v Inglewood Shire Council[14] where architect of building which happened to collapse, was find guilty of negligence despite of public authority’s inspection that failed to detect the flaw.

Bunchan v Ortho Pharmaceutical[15] presents a failure to warn about the possibility of danger relating to the product. Situation was deteriorated by the lack of appropriate guidance concerning usage which was caused by inadequate label placed on the container.

To solve this problem, when dealing with demanding products, manufacturer is under a duty to inform the consumer about risk connected with the good in question using a leaflet or a labels[16]. It applies for all situations where the product needs to be used in correct way[17]. A matter of appropriate notice is a question of fact and degree of the danger the article brings. If an adequate warning is being provided with potentially dangerous product there in no liability reasting on producer as it constitutes novous actus interveniens that erases chain of causation.[18]

If product is found to be faulty after being put out into the market, the producer is deemed to issue information with a warning and recall the product if it is indispensable[19].

However, when danger is obvious and reasonable to expect for an ordinary person, there is no duty of care[20]. Approach is presented in Liebeck v. McDonald's Restaurants[21] where a disposable cup with hot liquid covered with a lid is not defective itself due to the general knowledge. It states: if a cup strucks hard surface it may result in an injury. Standard of safety is defined by what the society in general is entitled to expect in comparison to what they actually expect.

Year 1936 brought a significant extension to the ‘narrow rule’. By the time of Grant v Australian Knitting Mills Ltd[23] case, where problems with proving defects in product’s design arose[24], it was often problematic to prove that the defender was negligent in common law. Basis of the problem was lack of witness who could speak to the design flaws. Lord Wright adopted the rule of evidence called res ipsa loguitur[25]. In accordance to prior, events along with consistent facts justification are in competence to establish a breach[26].

Case Daniels v R White[27]contradicts Grant’s res ipsa loguitor approach stating that it is possible for a manufacturer to prove that process of manufacturing has been performed with the best possible quality and is the best in trade so that no liability can be recognized.

A product design flaw is a random problem causing tragedies all around the world. Thalidomide was a German drug emitted in 1957 that caused over 10,000 human birth deformities attacking nervous system of its victims. Thalidomide was being prescribed to pregnant women as a sedative and to alleviate morning sickness drug. The principle of self-monitoring applied. There was no legislation in the Federal Republic of Germany that would require actual investigation and test concerning new medicines. In consequence, drugs did not have to be tested for their destructive tendency. There was no legal authority to support the claim along with problems to establishing link between deformities and medicine.

Carrol v Fearon[28] shares the same issue as Thalidomide case. Onus lies on the pursuer to bring evidence of a breach of duty and prove that the manufacturer has been negligent. If action fails at this point there can be no further proceedings. Even when defect has been established it is a matter for a judge to decide whether on the balance of probabilities it was due to manufacturer’s neglect.

When deciding whether product is defective or not, character of potential injury is taken into account. Relevant measures are deemed to be taken in circumstances when product may determine imminence to sensitive parts of the body[29].

Strict liability regime for products has been imposed in 1987 with Consumer Protection Act.  Act clearly defines the product as well as who is the consumer. It places liability on producers of the product; own branders and importers, in cases where any damage occurred due to product’s defect[30]. Act covers  damages, loss or injuries that exceed the sum of £275. Damage does not include loss or damage to product itself nor to any other product supplied with the product. Economic loss is consequently excluded.

Worley v Tambrands Ltd[31] established objective test used to justify whether the product has a defect or not. It is required that the pursuer brings evidence of product’s defect on the balance of probabilities[32]. Feldman v Elderly Laboratories[33] illustrates the importance of product’s safety over the logic of producer’s conducts. Again, there is no need to prove defenders fault. However is it required to show that the injury, damage or loss was a consequent of the defect in question[34].

A v National Blood Authority[35] illustrates how scientific and technical knowledge at relevant time can justify defect. ‘State of art’ or ‘development of risk’ defence is believed to be the most controversial issue under the act. Usage requirements demand including all data in the information circuit of the scientific community as entirety taking under consideration actual possibilities for the information circulates. In this case the producer was aware that some blood samples might be infected but at that time there was no possibility of precaution to take. In the end court held that blood was defective and users did not know the risk they were taking and lack of care they were entitled to receive with free from infections blood transfer. When users are aware of the defect product can’t be held defective anymore for example usage of condoms is not believed to be hundred percent effective.[36]

Another defence brought by the Act accounts to contributory negligence. It concerns products that are components or raw materials in an intricate product. Additionally defend requires defect to be entirely attributable to the design of the product in question.

It is well know that in practise, where statutory regime is not applicable, common law liability remains. Action in circumstances where problems with identifying responsible person arisen can be simply dismissed.[37]

Another issue related with subject is being brought by Veedfald v Arhus Amtskommune[38] case where part of Consumer Protection Act has been adopted stating that a supplier is not strictly liable when a defective article was not provided in the course of business. In this case medical service has been funded from public funds nevertheless for economic purpose.

In order to held strict liability damage must be a consequence ‘wholly or partially ‘by the product’s defect[39]. Defectiveness of the product is defined by the Act as ‘if the safety of the product is not such as persons are entitled to expect’[40]. Issue is tested by the standards of hypothetical reasonable man in the same position as manufacturer. In Abouzaid v Mothercare[41]the pursuer lost ability to see when the pushchair strap recoiled. Court held that test of defectiveness depend mostly on society expectations[42].

In the end, Act has been a usage for pursuers with small claim mainly relating to food. Product liability can be used for extending the scope of cases appropriate for litigation and settlement. This branch of law may serve society as an opportunity for legal education and acknowledgement relating to their rights and duties. This nature expand is likely to contribute much to the evolution of tort in the long distance perspective.

As it can be seen, product liability law is growing in strength with every new precedent establishing new principles when new issue occurs. Another method that is being used in Scotland is simply adopting models from different countries and learning on their mistakes. System has grown for the as 80 years since Donoghue v Stevenson and proceeds in action.

[25] the thing speak for itself