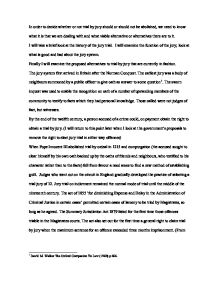 In order to decide whether or not trial by jury should or should not be abolished, we need to know what it is that we are dealing with and what viable alternative or alternatives there are to it.

In order to decide whether or not trial by jury should or should not be abolished, we need to know what it is that we are dealing with and what viable alternative or alternatives there are to it. I will take a brief look at the history of the jury trial. I will examine the function of the jury; look at what is good and bad about the jury system. Finally I will examine the proposed alternatives to trial by jury that are currently in fashion. The jury system first arrived in Britain after the Norman Conquest. The earliest jury was a body of neighbours summoned by a public officer to give oath as answer to some question1. The sworn inquest was used to enable the recognition on oath of a number of upstanding members of the community to testify to facts which they had personal knowledge. Those called were not judges of fact, but witnesses. By the end of the twelfth century, a person accused of a crime could, on payment obtain the right to obtain a trial by jury. (I will return to this point later when I look at the government's proposals to remove the right to elect jury trial in either way offences) When Pope Innocent III abolished trial by ordeal in 1215 and compurgation (the accused sought to clear himself by his own oath backed up by the oaths of friends and neighbours, who testified to his character rather than to the facts) fell from favour a need arose to find a new method of establishing guilt. Judges who went out on the circuit in England gradually developed the practice of selecting a trial jury of 12. Jury trial on indictment remained the normal mode of trial until the middle of the nineteenth century. The act of 1855 'for diminishing Expense and Delay in the Administration of Criminal Justice in certain cases' permitted certain cases of larceny to be tried by Magistrates, so long as he agreed. ...read more.

Secondly it forms some protection against oppressive or politically motivated prosecution. However the perverse verdict is not just about the jury's ability to protect a small number of defendants from oppression. They can come about because the jury has failed to understand the evidence properly. This may be better termed an unreasoned verdict. A study by Mc Cabe and Purves11 looked at 173 acquittals and concluded that fifteen (9%) defied the evidence. At this point it may be pertinent to remind ourselves that the purpose of a trial is to determine the guilt or innocence of the accused based on the facts presented and to deliver a verdict according to the law. This is the same for all modes of trial not just in jury trials. In order to tackle this problem it would help to know how juries reach a verdict. At the present this is not possible because of the Contempt of Court Act 1981, which prohibits asking jurors how they came to their decision. If this act were changed to allow research into how juries come to a decision the problems associated with this type of verdict may be addressed. Another approach might be to remove the right altogether thereby bringing jury trial in line with other modes of trial. A criticism of trial by jury is that it a defendant's fight to trail by jury in either way offences can be Manipulated, to the advantage of the defendant. Those in favour of limiting or abolishing this right Claim that this is a major problem. In the government consultation paper on determining the mode Of trail it states. For defendants who admit their guilt, there are on the face of it few advantages in Crown Court trial: cases are likely to take longer to come to court and the upper limit on Crown Court sentences exceeds that in the magistrates' court. ...read more.

Secondly at present Magistrates are volunteers who give up small amounts of their time to sit. If they were to be asked to sit for longer as would be necessary in serious or complex trials, this could cause problems for them with respect to work or other commitments. In order to combat this it might be thought necessary to compensate them for this and this could be the start of a slippery slope towards Magistrates becoming paid. Thereby removing the last vestiges of public participation in our criminal justice system via the back door. Thirdly I feel that it would be difficult to prevent judges from dominating this system, after all the judge would only need to 'persuade' one member of the panel to his point of view in order to get his way. One cannot get away from the fact that jury trial is expensive, when compared to Magistrates trials In 1997-98 a trial day cost �8700 at crown court and �500 at Magistrates court15. None of our public services have bottomless budgets and the savings that could potentially be made by abolishing the jury system are substantial. However I feel that the alternatives to the jury system proposed all have major flaws, some of which could adversely affect the perception of our criminal justice system as being overall a fair and just system. I feel that we should keep trial by jury and implement reforms that ensure that it becomes an even fairer and more representative system. 1 David M. Walker The Oxford Companion To Law (1980) p 686. 2 British Criminal Statistics Source www.criminal-justice-system.gov.uk 3 http://www.criminal-courts-review.org.uk/ Chapter 5 Juries 4 Jury Excusal and Deferral, Research Findings No. 102, Home Office Research Development and Statistics Directorate 5 http://www.criminal-courts-review.org.uk/ Chapter 5 Juries Para 16 6 http://www.criminal-courts-review.org.uk/ Chapter 5 Juries Para 26 7 http://www.criminal-courts-review.org.uk/ Chapter 5 Juries Para 27 8 9 10 11 The Jury at Work (1972) 12http://www.parliament.uk/commons/lib/research/rp2000/rp00-023.pdf Page 18-19 13 British Criminal Statistics By Tom Walkins Source www.criminal-justice-system.gov.uk 14 http://www.warwick.ac.uk/news/pr/law/191 15 Criminal Justice (Mode of Trial) Bill Briefing Note http://www.homeoffice.gov.uk/motbrief.htm ...read more.

A well put together essay, particularly those aspects focused on reforms. However, the prose style is, at times, too informal.

The issue of complexity of financial trials, and the difficulties this presents for the average juror, could be explored in more detail.