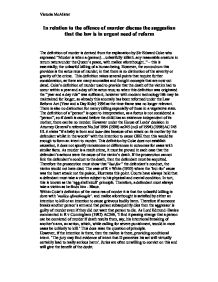 In relation to the offence of murder discuss the suggestion that the law is in urgent need of reform The definition of murder is derived from the explanation by Sir Edward Coke who expressed "Murder is when a (person)...unlawfully killeth..any reasonable creature in rerum natura under the Queen's peace, with malice aforethought.." - this is essentially; the unlawful killing of a human being. However, the conundrum this provides is the actus reus of murder; in that there is no distinction of the severity or gravity of the crime. This definition raises several points that require further consideration, as there are many anomalies and thought concepts that are now out dated. Coke's definition of murder used to provide that the death of the victim had to occur within a year and a day of the actus reus; so when this definition was originated the "year and a day rule" was sufficient, however with modern technology life may be maintained for longer, so already this anomaly has been reformed under the Law Reform Act (Year and a Day Rule) 1996 as the time frame was no longer relevant. ...read more.

Therefore if someone breaks another person's arm and that person subsequently dies then the aggressor is guilty of murder even if they did not want that person to die. As Lord Edmund-Davies commented in R v Cunningham (1982) AC566, 'I find it passing strange that a person can be convicted of murder if death results from, say, his intentional breaking of another's arm, an action, which, while calling for severe punishment, would in most cases be unlikely to kill.' This does raise the question of principle. However, if the intention is there, then the malice is there, providing conditional intent. 'The jury may find evidence of intent that D perceives his act will virtually certainly lead to really serious harm'. Juries are often unwilling to convict on this and will give the benefit of the doubt. Within the law there are three ways to qualify for murder. Firstly, murder requires intention, and nothing less will suffice -R v Moloney (1985) 1 AC 905. Secondly, section 8 Criminal Justice Act 1967 provides that intention is a subjective test. Thirdly, R v Nedrick (1986) ...read more.

However, there are possible law reforms within the draft criminal code 1989 that state that mens rea should be reformed with a move towards defining intention. This would give the judge more influence in stating as a certainty of what the law is - rather than a jury that is only "entitled" to find evidence of intent. Solutions for reforms may involve that there are degrees of murder as in America. Thus there would be different sentences for mercy killing and a maliciously planned murder. However this raises the dilemma of would this unnecessarily complicate the law by offering a way out for criminals or would it offer a solution that is more understanding of circumstances. This area was slightly reformed in 2004 when partial defences of provocation and diminished responsibility for lower degrees of blame were introduced. In conclusion, it would seem that there is not an urgent need of reform even though there are possible faults at present with ambiguity. Also the uncertainty of intent and that there is no discrimination between these intentions do require clarification and perhaps considered as manslaughter. The law in relation to murder has worked for hundreds of years and as with all law has constantly been adapted. ?? ?? ?? ?? Victoria McAlister ...read more.

A good essay, but the student could have also considered the mandatory life sentence (some have called for its abolition) and self-defence and the Tony Martin debate.