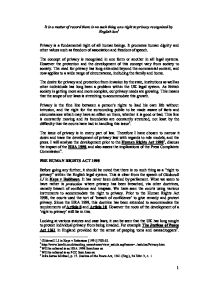 It is a matter of record there is no such thing as a right to privacy recognised by English law[1] Privacy is a fundamental right of all human beings. It promotes human dignity and other values such as freedom of association

It is a matter of record there is no such thing as a right to privacy recognised by English law1 Privacy is a fundamental right of all human beings. It promotes human dignity and other values such as freedom of association and freedom of speech. The concept of privacy is recognised in one form or another in all legal systems. However the protection and the development of this concept vary from society to society. The need for privacy has long extended beyond the commercial context, and now applies to a wide range of circumstance, including the family and home. The desire for privacy and protection from invasion by the state, institutions as well as other individuals has long been a problem within the UK legal system. As British society is getting more and more complex, our privacy needs are growing. This means that the scope of our laws is stretching to accommodate this growth. Privacy is the fine line between a person's rights to lead his own life without intrusion, and the right for the surrounding public to be made aware of facts and circumstances which may have an effect on them, whether it is good or bad. This line is constantly moving and its boundaries are constantly stretched, not least by the difficulty that the courts have had in handling this issue2. The issue of privacy is in every part of law. Therefore I have chosen to narrow it down and trace the development of privacy law with regards to role models, and the press. I will analyse the development prior to the Human Rights Act 19983, discuss the impact of the HRA 1998, and also assess the implications of the Press Complaints Commission4. PRE HUMAN RIGHTS ACT 1998 Before going any further, it should be noted that there is no such thing as a "right to privacy" within the English legal system. ...read more.

In the case of Douglas v Hello, the courts recognised that individuals had a right to privacy, not as a freestanding part of law, but which was entrenched in the doctrine of breach of confidence, However the courts also recognised that in order to grant relief the courts have to take into account the relevant rights under the HRA 1998. His judgement did not indicate whether the right to privacy outweighs the right to freedom of expression. Therefore in this respect there is no presumption that the freedom of expression under the convention will be greater than the law of confidence. In essence his judgement states that there can be no clear balance between freedom of expression and the breach of confidence, but rather this is decided on a case-by-case basis when such cases come in front of the courts. Brook LJ stated that by virtue of the s.12 (4) of the HRA 1998 the courts have to pay particular regard to the Code of Practice of the PCC. He also said that where a newspaper breached the Code of Practice, then the court is likely to find in favour of the claimant. In the same case Keene LJ addressed whether therefore s12 of the HRA 1998 tipped the balance in favour of freedom of expression. In para 150 he said that "The subsection does not seek to give priority to one convention right over another...it is merely requiring the court to apply its mind to how one right is to balanced, on the merits against another". The decision of this case clearly pointed the way for the development of privacy rights via the concept of breach of confidence. The decision was subsequently relied on in Venables v New News Group Newspapers20 to impose an injunction preventing the publication of the new identities of two men convicted when they were children of murdering a toddler, Jamie Bulger. ...read more.