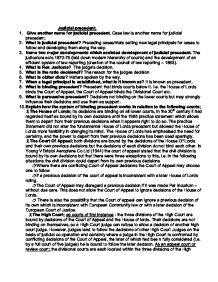 Judicial precedent. 1. Give another name for judicial precedent. Case law is another name for judicial precedent. 2. What is judicial precedent? Preceding cases/trials setting new legal principals for cases to follow and developing them along the way. 3. Name two major developments which assisted development of judicial precedent. The judicature acts 1873-75 (laid down modern hierarchy of courts) and the development of an efficient system of law reporting (creation of the council of law reporting - 1865). 4. What is Res Judicate? The judge's decision. 5. What is the ratio decidendi? The reason for the judges decision 6. What is obiter dicta? Matters spoken by the way. 7. When a legal principal is established, what is it known as? It is known as precedent. 8. What is binding precedent? Precedent that binds courts below it. I.e. the House of Lords binds the Court of Appeal, the Court of Appeal binds the Divisional Court etc. 9. What is persuasive precedent? Decisions not binding on the lower courts but may strongly influence their decisions and use them as support. 10. Explain how the system of binding precedent works in relation to the following courts; (The House of Lords; its decisions are binding on all lower courts, ...read more.

Lord Bingham said emphasised that the divisional court should not depart from its own decisions unless satisfied that they are clearly wrong. In criminal appeal cases the QBD may refuse to allow its own earlier decisions where it feels the earlier decision was made wrongly. The divisional courts are bound by the decisions of the House of Lords and the court of Appeal. (Crown courts; bound by decisions of the House of Lords Court of Appeal. Its own decisions do not form binding precedent. (Magistrates and county courts; these are inferior courts and are bound by decisions of all higher courts. They are not bound by their own decisions and the majority of these cases are not reported. 11. Give examples of persuasive precedent. (Obiter dicta of judges i.e. legal principles or pronouncements which are not necessarily for the decision in the case and are therefore not part of the ratio and not binding. ( Decisions of the judicial committee of the Privy Council when dealing with appeals from Commonwealth countries. These are particularly influential as the committee is made up of law lords. ( Decisions of commonwealth courts. ...read more.

(Retrospective effect - changes mad by case law apply to events that happened before the case came to court. So, a person could be punished for doing something that he did when it was not a crime. (Undemocratic - although it is accepted that judges can develop the law some argue that in a democracy only elected representatives of the people should have power to make law. 15. Do judges make law? The judiciary have considerable powers to influence the development of the law. But the prospect of judges creating the law is unsatisfactory to many involving as it is a breach of the separation of powers i.e. judges are there to apply the law not make it. 16. Explain how the House of Lords current approach to judicial law making is laid down in CV DPP (1995) (judges should be slow to impose their own remedies where the solution was doubtful. ( Judges should be slow to act where parliament has declined to do so or had legislated in the area without touching upon the difficulty raised in the present case. ( Fundamental legal rules should not be lightly overturned. ( Issues of social policy should be left for determination by parliament. ( Judicial solutions should not be imposed unless finality was likely to result. ...read more.