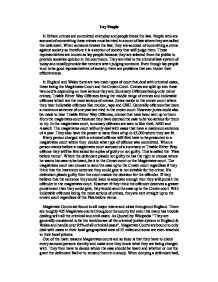 Lay People In Britain crimes are committed everyday and people break the law. People who are accused of committing these crimes must be tried in a court of law where they are called the defendant. When someone breaks the law, they are accused of committing a crime against society so therefore it is a section of society that will judge them. These representatives are known as lay people because they are selected from the public to provide societies opinion in the courtroom. They are vital to the criminal law system of today and usually provide fair verdicts when judging someone. Even though lay people tend to be good representatives of society, there are problems that can hinder their effectiveness. In England and Wales there are two main types of court that deal with criminal cases, these being the Magistrates Court and the Crown Court. Crimes are split up into these two courts depending on how serious they are; Summary Offences being only minor crimes, Triable Either Way Offences being the middle range of crimes and indictable offences which are the most serious of crimes. Juries reside in the crown court where they hear indictable offences like murder, rape and GBH. Generally offences that have a minimum sentence of one year are tried in the crown court. However juries could also be made to hear Triable Either Way Offences, crimes that have been sent up to them from the magistrates court because they have deemed the case to be too serious for them to try. In the magistrates court, summary offences are seen to like theft, ABH and Assault. The magistrates court will only deal with cases that have a maximum sentence of a year. They also have the power to issue fines of up to �5,000 where they see fit. Every person charged with a criminal offence will first have to be presented to a magistrates court where they decide what type of offence was committed. ...read more.

Cases at the Crown court can take a long while to deal with as it must be made sure that the whole jury understands all the evidence being given. The whole panel must be present every moment of the trial to make sure they all receive the evidence from the different sides. All the evidence must be presented to the jury no matter how complicated and confusing it may be. If a person is illiterate then the court must make sure the evidence is given in a way that the person can understand because he is a representative of the illiterate section of society. The whole point of a jury is to represent society and decide whether the persons actions are wrong in the eyes of society. Juries try to give a unanimous verdict but a judge can choose to take a majority decision. Juries are highly valued in the system and are rarely seen to do things wrong. For example if they were to make a verdict and it was unfair because they didn't understand, it would be the judges thought for not explaining the point of law to them. This could cause a re-trial. To be liable for Jury service you must be aged between 19 and 70 and have lived in the United Kingdom for at least five years after reaching the age of 13. The selection process is completely random as the names are selected from the electoral register and the summoning bureau. You are disqualified from jury service if you have been imprisoned or detained for more than 5 years, imprisoned for the protection of society or if you have served an extended sentence for any crime. You can be suspended for 10 years if at anytime in the last 10 years you have been given a community order or served a prison sentence. If you suffer from a mental illness you are not allowed to sit in a jury. ...read more.

This was wrong not because of the use of the Ouija board but because the Jury had not used it in there discussion room and had discussed the case out of court. Another problem is that in cases involving money and large figures such as fraud the Jury may have to sift through pages and pages of digits without properly understanding it. This isn't pleasant for the jury and it could cause an unfair verdict. Jury members may become bored and rush the verdict. A full jury trial can also take a lot of time and cost a great deal. Jurors lives could be greatly effected by the length of a case. Media coverage could also cause jurors to form a bias view of the case. It can be very hard for jurors not to hear about a popular case and receive outside information that could be false and harmful to the fairness of the case. There is also a risk that outside sources could corrupt a jury. There is currently talk that an important case involving a drugs baron is being discussed as to weather a jury should be used as there is such a high chance of corruption. The name of the case hasn't been disclosed to the public but if the decision to not use a Jury does go ahead then it may change our judicial system for many years to come. In my opinion I believe that the system works well as it is. The Magistrates acts as a workhorse dealing with all the minor cases and it does this well. Perhaps there could be more done to increase the amount of Ethnics working in the Magistrates to reflect local communities and more adequate training to be given to decrease the amount the Magistrates rely on the Clark of the court. The Jury system also works well providing the Jurors with plenty of power to reflect societies opinion. I don't believe that Juries should be removed in the future because if this were to happen then societies opinion may be overlooked. Sources used http://en.wikipedia.org/wiki/Magistrates'_Courts www.a-level-law.com/caselibrary/R%20v%20YOUNG%20%5B1995%5D%20QB%20324%20-%20CA.doc http://www.dca.gov.uk/judicial/ja_arep2002/annex_g.html GCSE Law Book ...read more.