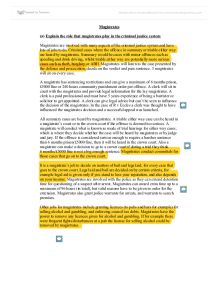 Magistrates (a) Explain the role that magistrates play in the criminal justice system Magistrates are involved with many aspects of the criminal justice system and have lots of jobs to do. Criminal cases where the offence in summary or triable either way are heard by magistrates. Summary would be cases with minor offences such as speeding and drink driving, whilst triable either way are potentially more serious cases such as theft, burglary or ABH. Magistrates will listen to the case presented by the defence and prosecution, decide on the verdict and pass sentence. 3 magistrates will sit on every case. A magistrate has sentencing restrictions and can give a maximum of 6 months prison, �5000 fine or 240 hours community punishment order per offence. A clerk will sit in court with the magistrates and provide legal information for the lay magistrates. A clerk is a paid professional and must have 5 years experience of being a barrister or solicitor to get appointed. A clerk can give legal advice but can't be seen to influence the decision of the magistrates. In the case of R v Eccles a clerk was thought to have influenced the magistrates decision and a successful appeal was launched. ...read more.

There are exemptions for example people with serious previous convictions, undischarged bankrupts and police can't become magistrates. Applicants must show 6 main criteria which are be of good character, have a good level of social awareness, show sound judgement, have a good understanding and communication, show maturity and sound temperament, show commitment and reliability. The Local magistrates advisory committee recommend people for appointment to the Lord Chancellor. A prospective magistrate can be put forward by any person or organisation or put themselves forward. The advisory committee (staffed by magistrates) consider applicants as well as advertising and interviewing prospective magistrates. It is argued that interviewing applicants is not the best way. The reasons for this would be that people from a professional and particularly managerial background would have greater experience of interviews, and therefore a better chance of being successful than someone with a non-professional occupation. This causes most of the magistrates to be from a professional background, which isn't really balanced. The composition of the bench is also affected by the fact that magistrates are not paid (but may receive expenses and compensation for loss of earnings), and must sit at least 26 times a year. Because they don't get paid it would be difficult for someone with a low paid job to be a magistrate. ...read more.

applying to become magistrates. So far it hasn't really worked as intended. In 1992 research from the lord chancellors department show 2% of magistrates were black. This doesn't seem a lot but as there is only a 5% black population it is reasonably balanced. Gender of magistrates is very balance with figures showing 47% female. Magistrates usually retire when they get to 70 unless the get removed earlier through infirmity. Magistrates can be sacked by the lord chancellor without reason if they behave badly. This happened with Kathleen Cripps in 1985 where she was removed when seen demonstrating against poll tax outside the court in which she sat as a magistrate. I think that because of the fact that magistrates are not paid and will have to sit at least 26 times, missing work often it is difficult to attract younger people or working class and manual workers to become magistrates. Because of this it is quite difficult to achieve a balanced bench. The lord chancellors criteria does help to ensure there are all different magistrates from wider reaching backgrounds making the bench more balanced. But sometimes the selction process can be made unfair as a balanced bench is trying to be achieved, where prospective magistrates that are too similar to the type of existing magistrates that they cant get appointed. ...read more.

A good answer wholly directed at the question; setting out both how magistrates are appointed and commenting on the make-up of the bench nationally.
Rating *****