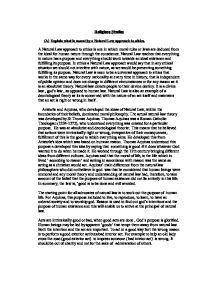 A Natural Law approach to ethics is one in which moral rules or laws are deduced from the ideal for human nature through the conscience. Natural Law teaches that everything in nature has a purpose and everything should work towards an ideal existance and fulfilling its purpose. In ethics a Natural Law approach would say that in any ethical situation we should not interfere with nature, as we would be preventing something fulfilling its purpose. Natural Law is seen to be a universal approach to ethics that works in the same way for every nationality at every time in history, that is independent of public opinion and does not change in different circumstances or for any reason as it is an absolutist theory. Natural law directs people to their devine destiny. It is a divine law , god’s law , as opposed to human law. Natural Law is also an example of a deontological theory as its is concerned with the nature of an act itself and maintains that an act is right or wrong in itself .

Aristotle and Aquinas, who developed the ideas of Natural Law, within the boundaries of their beliefs, dominated moral philosophy. The actual natural law theory was developed by St Thomas Aquinas. Thomas Aquinas was a Roman Catholic Theologian (1224-1275), who understood everything was created for a particular purpose.  He was an absolutist and deontological theorist. This means that he believed that actions were intrinsically right or wrong, irrespective of their consequences; fulfilment of this is the good to which everything aims. He developed this from Aristotle's idea which was based on humnan reason. Thomas Aquinas understood this purpose a developed this idea by saying that  something is good if it does whatever God wanted it to do when he made it. He worked through the 12th century bringing different ideas from different cultures. Aquinas said that the moral of life, is the life which is lived ‘ according to reason’ and actimg in accordance with reason was the same as acting as a christian would act. Aquinas’ main difference from the natural law philosophers who did not believe in god  was that he considered that human beings were immoral and any moral theory and understanding of natural law had, therefore, to take account of the belief that the purpose of human existance did not lie entirely in this life. In summary, the law is, ‘good is to be done and evil avoided.

Acts are intrinsically good or bad, when good acts are done , God’s purpose is glorified. Human beings may be led by apparent ‘goods’ that tempt them away from natural law. Both the intention and the act are important. To act in a good way fort the wrong reason is to perform a good exterior act buta bad interior act. For example to help an old lady cross the road (good exterior act)  to impress someone ( bad inteior act)  is wrong. It should be out of charity and not for the sake of  admiraration of others.

Natural law teaches that everything in nature has a purpose and everything should work towards an ideal existence and fulfilling its purpose. Natural law is seen a universal approach to ethics that works in the same way for every nationality and at every time in history, that is independent of public opinion and does not change in different circumstances for any reason, therefore natural law is an absolute theory. It teaches to ‘do good and avoid evil’. Experiences that are not condoned by the natural law are frowned upon.

However, some people would argue that natural law goes against common sense.

Practical decision making abilities come from previous knowledge and from the consequences as result of actions. However natural law would lead us, never to have a chance to know what it is like to make a wrong decision and learn from the consequences and our mistakes. Common sense leads us to understand why things happen, and learn valuable lessons in life.  Natural law takes away from people the ability to make practical decisions based on previous experience and specific circumstances. It goes against the idea that things can be right or wrong in different circumstances.  Many societies around the world today accept murder or abortion as illegal; this however does make them wrong; sometimes they will make perfect sense.

An example whereby natural law goes against common sense is in the case of euthanasia. If you’re loved one is in pain and dying from a terminal illness, and they ask you to help them die. What would you do? Some people would argue that it is common sense that you would do as your loved one wish.  As they have stood by you for the whole of your life and helped you in everyway possible, so should you do the same and in return help them to end there life, if they believe that is what they really want to. Surly you wouldn’t want your loved one to be in pain anymore than they have to be, and if the thing they want most is for you to help them to their life, then most people would see no problem with this, even though they would find it really hard. However natural law would argue that euthanasia is always wrong in every circumstance. As euthanasia is murder and natural law teaches that murder is always wrong. Also natural law argues that committing suicide is also always also wrong and goes against the purpose of life. Therefore natural law would say that in no circumstance is it ok to let or help loved one die, regardless of the state in which they are in. Therefore natural law goes against common sense, and common sense goes against natural law.

Some of the rules, in which Natural Law apply are unacceptable to common sense. For example human teeth include incisors, for nibbling vegetables, and canines, for eating meat; by the principles of Natural Law, this would mean that people therefore ought to eat meat as well as vegetables, and that choosing to be a vegetarian is morally wrong.

Also natural law claims that sexual intercourse is for the purpose of procreation only; therefore people who are infertile, perhaps because they have passed the menopause or because of some other condition, should not have sex with their wives or husbands.