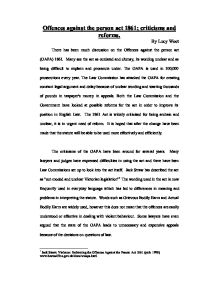 Offences against the person act 1861; criticisms and reforms.

Offences against the person act 1861; criticisms and reforms. By Lucy Weet There has been much discussion on the Offences against the person act (OAPA) 1861. Many see the act as outdated and clumsy, its wording unclear and as being difficult to explain and prosecute under. The OAPA is used in 100,000 prosecutions every year. The Law Commission has attacked the OAPA for creating constant legal argument and delay because of unclear wording and wasting thousands of pounds in taxpayer's money in appeals. Both the Law Commission and the Government have looked at possible reforms for the act in order to improve its position in English Law. The 1861 Act is widely criticised for being archaic and unclear, it is in urgent need of reform. It is hoped that after the change have been made that the statute will be able to be used more effectively and efficiently. The criticisms of the OAPA have been around for several years. Many lawyers and judges have expressed difficulties in using the act and there have been Law Commissions set up to look into the act itself. Jack Straw has described the act as "out-moded and unclear Victorian legislation"1 The wording used in the act is now frequently used in everyday language which has led to differences in meaning and problems in interpreting the statute. ...read more.

A spouse can now be compelled to give evidence against a partner in court, however no one can be forced to give evidence. Orders can be made prohibiting violence against a partner and orders can also be passed which remove the violent partner from the home, although it is hard to enforce these if the partner really wants to get at the victim. The Law Commission considered reforming the OAPA at the beginning of the 1990s, producing a report in 1993. In 1998 the Home Office produced a consultation document to show its commitment to modernising and improving the law. In contrast to the Law Commission's plans to abolish the OAPA and replace it with a Criminal Justice Act the government are simply planning to reform it with an act. The Government doesn't intend to make the law any tougher or more lenient, just to make it clearer and easier to use. The draft Bill updates the language and avoids words which could be unclear. The Criminal Law Revision Committee had suggested getting rid of the distinctions between wounding and "bodily harm" and introduce "causing injury". They also suggested a distinction between serious injury and injury, and that serious injury with intent should be more serious than serious injury caused by recklessness. ...read more.

The maximum penalty is 10 years imprisonment. Clause 14 provides definitions of terms such as intent and recklessness. The definition of recklessness requires a subjective test to be applied in establishing mens rea and reflects the case of Savage and Parmenter 1992. These new definitions make it clear that to be reckless, the defendant must take a risk knowing or believing that circumstances could lead to the result. The bill also defines "injury" as physical or mental injury, but leaves serious injury open to interpretation. However "anything caused by disease" is not an injury except in Clause 1. In conclusion, it can clearly be seen that the law on the Offence Against the Person Act 1861 is outdated and unclear, creating unnecessary confusion in the courts. The Consultation Paper of 1998 shows the way in which the Government intends to modernise and simplify the law in this area. In particular, it provides a new hierarchy of offences to replace the existing range of statutory and common-law offences. By making the law more accessible in this way, it will smooth the passage of thousands of cases a year, allowing citizen to understand the criminal offences more easily and enabling the police to explain and charge offences which are more widely understood. It is also hoped that the task of judges, magistrates and juries will become more straightforward in the administration of justice. ...read more.