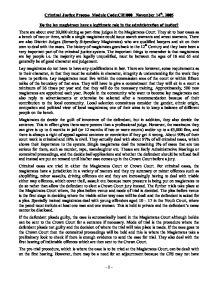 Part-time judges in the Magistrates Court.

There are about over 30,000 sitting as part-time judges in the Magistrates Court. They sit to hear cases as a bench of two or three, while a single magistrate could issue search warrants and arrest warrants. There are also District Judges (formerly Stipendiary Magistrates) who are qualified lawyers and sit on their own to deal with the cases. The history of magistrates goes back to the 12th Century and they have been a very important part of the criminal justice system. The important things to remember is that magistrates are lay people i.e. the majority are legally unqualified, must be between the ages of 18 and 65 and generally be of good character and judgement. Lay magistrates do not have to have any qualifications in law. There are however, some requirements as to their character, in that they must be suitable in character, integrity & understanding for the work they have to perform. Lay magistrates must live within the commission area of the court or within fifteen miles of the boundary of that area. They will have to give a commitment that they will sit in a court a minimum of 26 times per year and that they will do the necessary training. Approximately, 500 new magistrates are appointed each year. ...read more.

However, there may be a need for an adjournment because the CPS may not have the information required for completing the case or possibly because the defendant wants to seek legal advice. Moreover, it could be that the defendant has pleaded guilty and the Magistrates want pre-sentence reports on him/her before deciding what sentence to impose in addition it will be decided if the defendant should be remanded on bail or in custody. The Magistrates also deal with side matters that connect to criminal cases such as deciding bail applications. As regards civil matters, magistrates deal with unpaid utility bills, unpaid council tax and TV licences. They also deal with whether to grant alcohol and gambling licences to pubs, clubs, betting shops etc. Specially trained magistrates also deal with family cases in the Family Court. These deal with areas such as injunction orders for protection against violence, maintenance issues and adoption orders under the Children's Act 1989. Lay magistrates also sit at the Crown Court to hear appeals from the Magistrates court, where they form a panel with a qualified judge, usually a Circuit or a District Judge. Retirement age is normally 70 and they can be dismissed by the Lord Chancellor if they have a criminal conviction or misbehaviour of some form (about 10 are removed every year). ...read more.

Lay magistrates in particular have the reputation of being 'case hardened' and also too easily swayed by police evidence. Other criticisms include the perception of them as 'middle class', 'middle aged' and 'middle minded' who have little in common with the young working class defendants who make up the majority of defendants. There is also frequent inconsistency in sentencing and in the granting of bail, that they may be unduly influenced by the clerk and that their workload is becoming too great and too complicated, especially in the family court, considering the inadequate training they receive. However, this is countered by the view that, as members of the local community, they provide a wider cross-section on the bench than would be possible if you used professional judges only. Also, as cases can be dealt with more quickly, it is cheap, both for the government and for the defendant (9 times cheaper than a Crown Court trial). Magistrates perform many different roles and have both civil and criminal jurisdiction. Their powers in sentencing and imprisonment are limited, but the question must be asked, even if there are defects, what would be the alternative if lay justices were to be abolished. ?? ?? ?? ?? Criminal Justice Process_Module Code:CR1000_ November 14th, 2005 Do the lay magistracy have a legitimate role in the administration of justice? - 1 - ...read more.

A good summary of the key points. However, the description and evaluation feel a little disjointed.

Reference could also be made to the variable nature of training, inconsistency in sentencing and over-reliance on the clerk. There has also been found to be a prosecution bias.