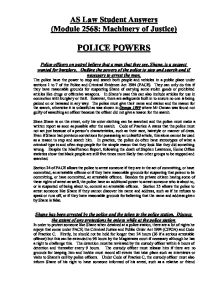 AS Law Student Answers (Module 2568: Machinery of Justice) POLICE POWERS Police officers on patrol believe that a man that they see, Shane, is a suspect wanted for burglary. Outline the powers of the police to stop and search and if necessary to arrest the man. The police have the power to stop and search both people and vehicles in a public place under sections 1 to 7 of the Police and Criminal Evidence Act 1984 (PACE). They can only do this if they have reasonable grounds for suspecting Shane of carrying some stolen goods or prohibited articles like drugs or offensive weapons. In Shane's case this can also include articles for use in connection with burglary or theft. However, there are safeguards built in to ensure no one is being picked on or harassed in any way. The police must give their name and station and the reason for the search, otherwise it is unlawful as was shown in Osman 1999 where Mr Osman was found not guilty of assaulting an officer because the officer did not give a reason for the search. Since Shane is on the street, only his outer clothing can be searched and the police must make a written report as soon as possible after the search. Code of Practice A states that the police must not act just because of a person's characteristics, such as their race, hairstyle or manner of dress. Even if Shane had previous convictions for possessing an unlawful article, this alone cannot be used as a reason to stop and search him. In practice, the police do often have stereotypes of what a criminal type is and often stop people for the simple reason that they look like they did something wrong. Despite the MacPherson Report, following the death of Stephen Lawrence, Home Office statistics show that black people are still five times more likely than other groups to be stopped and searched. ...read more.

The interviews with Homer by the police officer must be recorded on tape or on video, as stated in the PACE code of conduct. Code E states that evidence must be recorded on tape or video of a suspect's interview. The code of conduct code D states that the police should deal with detention, treatment and questioning of a suspect. Homer has the right to be treated properly without violating or neglecting his rights. In section 58 of PACE Homer the right to legal advice, to consult a solicitor. This can be given for free or he can decide to get a suitable solicitor of his choice. The custody officer must get him to sign if he wishes to have legal advice. He would be told about his legal advice and also get a written notice. Since Homer's offence is indictable (murder), he only has the right to see his solicitor for up to 36 hours. This is because the access to a solicitor can lead to interference or harm to evidence or to other persons. During Homer's interview with the police, he has the right to have his solicitor present at the interview. Homer has the right to be checked by a doctor to indicate if he is suffering from any mental illness. He has the right to know why he has been arrested and detained. If the police fail to inform him of all the procedures, which is unlawful, the act can be said to be a breach of PACE. Due to the fact that Homer has being arrested for a serious arrestable offence (indictable), after 36 hours the police may apply to the magistrates to extend the length of his detention, but the maximum time he can be detained is 96 hours. After 96 hours he must be either charged with the offence or be released. Homer has the right to see or be made aware of his legal rights. ...read more.

had been committed, her arrest is initially all right, if the officer who arrested her had reasonable grounds for doing so. Was Moll told of the reason for her arrest and the fact that she was under arrest? If not told as soon as practicable, then there is a breach of S.38 of PACE. Moll, once at the police station, requested to see a lawyer; she has not been given one, and her request was not denied by a senior officer nor was any reason given for the delay, nor was the reason noted in the custody records. So, there seems to have been a reasonable request for a lawyer. There has been delay, and so the codes have not been complied with. Moll was questioned for at least 7 hours, and as PACE says there should be a review every six hours, this is again another breach of PACE. Again, there are reasons when it is all right not to do so e.g. when it is not practicable to do so, however this does not seem to be the situation here. Looking now at Moll's confession and whether or not her confession will be admissible against her. Moll can try to say that it is not admissible, as the officers failed to be honest and upright with her in telling her that her sister had made a confession to get her to confess. In Mason (1988) the conviction was quashed when D made a confession after police told him they had evidence they did not have. Her confession may therefore be inadmissible. Moll could try to say that there was oppression on her (S.76) to make the confession. Moll can try to say she only made the confession as she was tired and wanted to get out of jail and that it was not the truth. As she was denied access to a solicitor, this may make her confession inadmissible (Samuel 1988). In conclusion, Moll may stand a good chance of having her confession declared inadmissible due to the many breaches of PACE. ...read more.

A competent response. This student understands the main provisions of PACE well. 4 Stars