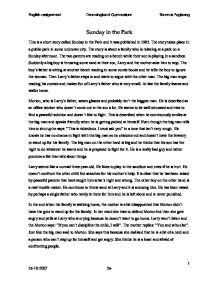 Sunday in the park

Sunday in the Park

This is a short story called Sunday in the Park and it was published in 1985. The story takes place in a public park in some unknown city. The story is about a family who is relaxing at a park on a Sunday afternoon. The two parents are reading on a bench while their son is playing in a sandbox. Suddenly a big boy is throwing some sand at their son, Larry and the mother asks him to stop. The boy´s father is sitting at another bench reading in some comic books and he tells the boy to ignore the woman. Then Larry´s father steps in and starts to argue with the other man. The big man stops reading his comics and makes fun of Larry´s father who is very small. At last the family leaves and walks home.

Morton, who is Larry´s father, wears glasses and probably isn’t the biggest man. He is described as an office worker who doesn’t come out in the sun a lot. He seems to be well educated and tries to find a peaceful solution and doesn’t like to fight. This is described when he continuously smiles at the big man and speaks friendly when he is getting picked at himself. Even though the big man tells him to shut up he says: “This is ridiculous. I must ask you” in a tone that isn’t very rough. He knows he has no chance in fight with the big man so he chickens out and doesn’t have the bravery to stand up for his family. The big man on the other hand is big and he thinks that his son has the right to do whatever he wants and he is prepared to fight for it. He is a really bad guy and rather punches a fist than talk about things.

Larry seems like a normal three-year-old. He likes to play in the sandbox and cries if he is hurt. He doesn’t confront the other child but searches for his mother´s help. It is clear that he has been raised by peaceful parents that have taught him what´s right and wrong. The other boy on the other hand is a real trouble maker. He continues to throw sand at Larry and it is amusing him. He has been raised by perhaps a single father who rarely is there for him and he is left alone and is never punished.

In the end when the family is walking home, the mother is a bit disappointed that Morton didn’t have the guts to stand up for the family. In her mind she tries to defend Morton but then she gets angry and yells at Larry who is crying because he doesn’t want to go home. Larry won’t listen and the Morton says: “If you can´t discipline the child, I will”. The mother replies: “You and who else”. Just like the big man said to Morton. She says this because she realized that he is a bit of a nerd and a person who can’t step up for himself and get angry. She thinks he is a loser and afraid of confronting people.