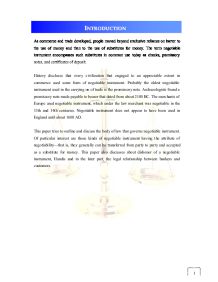 The Law Relating to Negotiable Instruments

* Jawabi Hundi Jawabi Hundi is used as a means of remittance of money from one place to another via a banker. The nature of the transaction known as Jawabi Hundi is as follows: A person desirous of making a remittance writes to the payee and delivers the letter to a banker, who either indorses it on to any of the correspondents near the payee's place of residence or negotiates its transfer. On its arrival the letter is forwarded to the payee who attends and gives his receipt in the form of an answer to the letter which is forwarded by the same channel to the drawer of the order. * Zikri Chit The Zikri Chit is a letter of protection given to the holder of a Hundi by the drawer or any other prior party when the Hundi is dishonored by non-acceptance or even when the dishonor is feared. It is addressed to some person residing in the town where the Hundi is payable, asking him to take up the Hundi in case of its dishonor. The addressee of the letter there accepts the Hundi for honor and pays it at maturity. According to the custom prevalent among the Marwari Shroffs, the Zikri Chit enables the person to accept for hondur the Hundi without being noted or protested. Zikri Chits are used throughout the country in connection with Marwari Hundis. * Purja It is a request in writing by the borrower to the lender to pay the amount mentioned therein. It bears a ten poise stamp. The Purja is not a bill of exchange, and is not negotiable. Purjas are commonly used for temporary loans. * Firman Jog Hundi It is a Hundi which is payable to order, and Dekhanhar is payable to bearer. When a Hundi is lost the holder may demand from the drawer a duplicate, which is called a Peth. ...read more.

It has also been provided that it shall be presumed, unless the contrary is proved, that the holder of such check received the check in the discharge of a liability. If the person committing an offence under the foretasted provisions is a company, the company itself as well as every person who was in charge of, and was responsible to, the company for the conduct of the business of the' company, shall be deemed to be guilty of offence and shall be liable to 'be proceeded against and punished accordingly. But a person will not be liable in a case where he proves that the offence was committed without his knowledge, or that he had exercised all due diligence to prevent the commission of such offence. CONCLUSION The history of the present Act is a long one. The Act was originally drafted in 1866 by the India Law Commission and introduced in December, 1867 in the Council and it was referred to a Select Committee. Objections were raised by the mercantile community to the numerous deviations from the English Law which it contained. The Bill had to be redrafted in 1877. After the lapse of a sufficient period for criticism by the Local Governments, the High Courts and the chambers of commerce, the Bill was revised by a Select Committee. In spite of this Bill could not reach the final stage. In 1880 by the Order of the Secretary of State, the Bill had to be referred to a new Law Commission. On the recommendation of the new Law Commission the Bill was re-drafted and again it was sent to a Select Committee which adopted most of the additions recommended by the new Law Commission. The draft thus prepared for the fourth time was introduced in the Council and was passed into law in 1881 being the Negotiable Instruments Act, 1881 (26 of 1881). Since its revision the negotiable instruments has been playing a significance role in maintaining a sound trade and commerce of this subcontinent. ...read more.