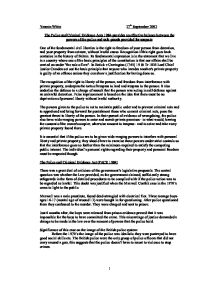 The Police and Criminal Evidence Acts 1984-provides an effective balance between the powers of the police and safe guards provided for suspects.

Yasmin White 27th September 2002 The Police and Criminal Evidence Acts 1984-provides an effective balance between the powers of the police and safe guards provided for suspects One of the fundamental civil liberties is the right to freedom of your person from detention, and your property from seizure, without lawful cause. Recognition if this right goes back centuries in the history of Britain. Its fundamental expression is in the statement that we live in a country where one of the basic principles of the constitution is that our affairs shall be carried on under "the rule of law". In Entick v Carrington (1765) 19 St Tr 1030 Lord Chief Justice Camden set out the basic principle that anyone who invades another's private property is guilty of an offence unless they can show a justification for having done so. The recognition of the right to liberty of the person, and freedom from interference with private property, underpins the torts of trespass to land and trespass to the person. It also underlies the defence to a charge of assault that the person was acting in self-defence against an unlawful detention. False imprisonment is based on the idea that there must be no deprivation of personal liberty without lawful authority. The powers given to the police to act to maintain public order and to prevent criminal acts and to apprehend and bring forward for punishment those who commit criminal acts, pose the greatest threat to liberty of the person. In their pursuit of evidence of wrongdoing, the police also have wide-ranging powers to enter and search private premises - in what would, barring the consent of the owner/occupier, otherwise amount to trespass - and to seize and take away private property found there. ...read more.

The constable shall answer on oath any question that the justice of the peace or judge hearing the application asks him. The warrant shall authorise an entry on one occasion only. A warrant to enter and search premises may be executed by any constable, entry and search under a warrant must be within one month from the date of its issue. Entry and search under a warrant must be at a reasonable hour unless it appears to the constable executing it that the purpose of a search may be frustrated on an entry at a reasonable hour. When the occupier of the premises is present, the constable: * shall identify himself to the occupier and, if not in uniform, shall produce to him documentary evidence that he is a constable; * shall produce a warrant to him, * shall supply him with a copy of it. A constable who is lawfully on any premises may seize anything on the premises if he has reasonable grounds for believing: * that it has been obtained in consequence of the commission of an offence: and * that it is necessary to seize it in order to prevent it being concealed, lost, damaged, altered or destroyed; * that it is evidence in relation to an offence which he is in investigating or any other offence. Anything which has been seized by a constable or taken away by a constable may be retained as long as is necessary, unless a photograph or copy would be sufficient for the purpose.' A magistrate can issue a search warrant, and a duty magistrate can issue warrants at hours other than when the courts are open. ...read more.

There is still no legal requirement to answer police questions, and, where by doing so you would incriminate yourself, it may often be better to make no comment to the police during interview. If the evidence against you is already strong, however, and you hope to be given a warning or caution by the police, rather than prosecuted in the courts, it may be best to admit the offence from the start. You may also receive credit in court for co-operating with the police. Conversely, if you have a strong defence to an accusation, putting it on the record straight away may lead to your avoiding being charged, or strengthen your defence when your case is heard in court. The decision whether or not to answer questions is often a difficult one, and it is best to take legal advice before making it. It is necessary to obtain a balance between protecting individual liberty and preventing/detecting crime, Parliament has tried to regulate this area of the law and the main police powers were set out in this Police and Criminal Evidence Act 1984. By looking at all these sections of the Police and Criminal Evidence Act 1984 I believe a satisfactory balance has been made between the Police powers and the Public's rights. However, exceptional cases do appear from time to time that tip this balance-for example it was seen that young black males were the cause of most crimes committed, and therefore have been targeted. Obviously there is problem with this. But generally, I believe there is a suitable balance. After the race riots of the 80's, it was felt that police powers had been diminished too extensively, so, the Criminal Justice and Public Order Act 1994, was introduced, it significantly extended police powers. 1 ...read more.

A good example of where a student has failed to properly consider the question set and instead provides a description of the law.