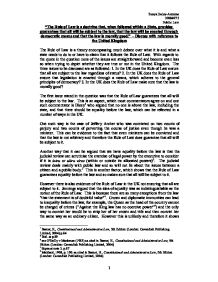 The Rule of Law is a doctrine that, when followed within a State, provides guarantees that all will be subject to the law, that the law will be enacted through democratic means and that the law is morally good.&quot; - Discuss

This means that the law cannot be retrospective unless it is entitling people to more rights.8 However in the UK this hasn't been happening and there have been incidents where the government has tried to introduce retrospective laws running contrary to the idea of democracy which is supposed to be supported by the Rule of Law. One such case is that of Burmah Oil v Lord Advocate (1965)9 that illustrated that laws will be enacted through undemocratic means and so the Rule of Law cannot guarantee that law will be enacted democratically. Another issue related to the Rule of Law and democracy is the separation of powers. There must be a separation of powers between the Legislature, Executive and Judiciary to ensure that laws are enacted democratically and to ensure one institution cannot overpower its counterparts. However, the Burmah Oil10 case illustrated how limited judges are at upholding the rights of citizens against the legislature and ultimately how overpowered the judiciary is by parliament.11 This also acts as proof to commentators who argue that the "separation of powers is the necessary condition for the Rule of Law in a modern society and therefore in a democratic society." ...read more.

In the UK that can be seen in the mechanisms of the welfare state and organisations such as the NHS and Legal Aid which is now making a come back. Therefore using Rawls, the Rule of Law in the UK is enforcing a law that is morally good. Whether the Rule of Law guarantees that the law is morally good tends to depend on your theoretical perspective. In the UK an example of the law becoming moral is the case of R v R (1991)22 where the Court of Human Rights argued that convicting a man of raping his wife illustrated a move towards greater equality between sexes and morality in the law. So, in the UK it can be argued that it has encompassed these 3 factors into its version of the Rule of Law to a certain extent but it can't be confidently said that the Rule of Law will guarantee these things in their absolute natures. Each state can use them in the proportions it sees necessary and so it can be fairly safe to conclude that the Rule of Law doesn't guarantee any of these factors but they can be seen (in varying quantities) in states claiming to follow the Rule of Law. ...read more.