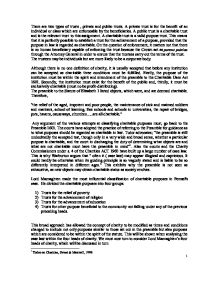 There are two types of trusts , private and public trusts. A private trust is for the benefit of an individual or class which are enforceable by the beneficiaries. A public trust is a charitable trust and is the relevant trust to this assignment. A ch...

There are two types of trusts , private and public trusts. A private trust is for the benefit of an individual or class which are enforceable by the beneficiaries. A public trust is a charitable trust and is the relevant trust to this assignment. A charitable trust is a valid purpose trust. This means that it is perfectly possible to establish a trust for the achievement of a purpose, provided that the purpose in law is regarded as charitable. On the question of enforcement, it matters not that there is no human beneficiary capable of enforcing the trust because the Crown act as parens patriae through the Attorney General in order to ensure that the trustees carry out the terms of the trust. The trustees may be individuals but are more likely to be a corporate body. Although there is no one definition of charity, it is usually accepted that before any institution can be accepted as charitable three conditions must be fulfilled. Firstly, the purpose of the institution must be within the spirit and intendment of the preamble to the Charitable Uses Act 1601. Secondly, the institution must exist for the benefit of the public and, thirdly, it must be exclusively charitable (must no be profit-distributing). The preamble to the Statute of Elizabeth 1 listed objects, which were, and are deemed charitable. Therefore, "the relief of the aged, impotent and poor people, the maintenance of sick and maimed soldiers and mariners, school of learning, free schools and schools in universities, the repair of bridges, pots, havens, causeways, churches.....are all charitable." ...read more.

The court may settle the question in the light of its own judicial knowledge. The advancement of religion is also a charitable purpose, which was not mentioned in the preamble, the nearest approach to it being 'the repair of churches'. Nevertheless the purpose of preamble was to demonstrate charitable purposes rather than draw up an exhaustive definition of charity. According to Lord Hanworth M.R the advancement of religion meant "the promotion of spiritual teaching in a wide sense, and the maintenance of the doctrines on which it rests, and the observations that serve to promote and manifest it"25. The subject of what constitutes religion has been significantly altered over the time. The case law in this area shows that a number of non-mainstream religions have gained charitable status. Two trusts associated with the Unification Church have registered charitable, as has a trust for the publication of the works of Joanna Southcote26. Similarly with regard to organisations which exist for the advancement of religion, such as the Church Army27, the Salvation Army28, the Church Missionary Society29, the Society for the Propagation of the Gospel in Foreign parts30, the Sunday School Association and the Protestant Alliance31. Outside the Christian religion, trusts for the advancement of the Jewish religion are undoubtedly charitable. Furthermore the Charity Commissioners have registered trusts for the advancement of the Hindu, Sikh, Islamic and Buddhist religions. Recently in Funnel v Stewart32 a faith healing movement was awarded charitable status, which Fletcher describes as 'a danger of the language of charity being stretched too far in pursuit of benignancy'33. ...read more.

Moreover the purpose of a rifle or pistol club which was once charitable has now ceased to be charitable. While it remains true that not every object beneficial to the community is necessarily charitable, it would be seen that the courts have in modern times adopted a broad approach to the preamble. This broad approach has allowed the concept of charity to evolve as the needs of society have changed. For instance charities for the advancement of education cover physical as well as mental education. Religion has been extended to cover spiritualists and the fourth head has been extended to a very wide range of bodies,45 which have been established in response to new public needs46. Recently there have been proposals for the definition of charity to cover the unemployed and regeneration of communities'47. It would appear that the judiciary may have been influenced to a certain extent when deciding subsequent cases. This may be due to the changing social ideas and policies, which have been mentioned above. Therefore, it seems that the approach that has been taken by the judiciary will mean that more purposes will obtain charitable status, as it seems that a trust will be considered charitable if a judge or a charity commissioner thinks that it accords with contemporary social ideas and policy on public good. However the courts have adopted an approach to referring back to the preamble when ever classifying whether or not a particular purpose is charitable or not in law. The result, in Lord Upjohn's words, is that 'the spirit and the intendment of the preamble to the Statute of Elizabeth have been stretched almost to breaking point'48. ...read more.