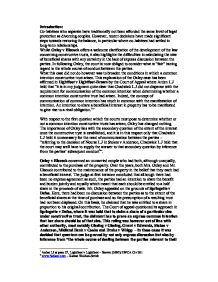 Trusts and its enforcements

Introduction: Co-habitees who separate have traditionally not been afforded the same level of legal protection as divorcing couples. However, recent decisions have made significant steps towards restoring the balance, in particular where co-habitees had settled in long-term relationships. Whilst Oxley v Hiscock offers a welcome clarification of the development of the law concerning constructive trusts, it also highlights the difficulties in calculating the size of beneficial shares with any certainty in the lack of express discussion between the parties. In following Oxley, the court is now obliged to consider what is "fair" having regard to the whole course of conduct between the parties. What this case did not do however was to broaden the conditions in which a common intention constructive trust arises. This explanation of the Oxley case has been affirmed in Lightfoot v Lightfoot-Brown by the Court of Appeal where Arden L.J held that "it is in my judgment quite clear that Chadwick L.J did not dispense with the requirement for communication of the common intention when determining whether a common intention constructive trust had arisen. Indeed, the concept of communication of common intention has much in common with the manifestation of intention. An intention to share a beneficial interest in property has to be manifested to give rise to a rival obligation.1" With respect to the first question which the courts must pose to determine whether or not a common intention constructive trusts has arisen, Oxley has changed nothing. ...read more.

stated that in Lloyds Bank v Rosset, Lord Bridge only addressed the primary question - "was there a common intention that each should have a beneficial interest in the property? - and not the secondary question - "what was the common intention of the parties as to the extent of their beneficial interests?" When addressing this secondary question, Chadwick L.J. considered there to be three different approaches. The first approach was adopted by Lord Diplock in Gissing v Gissing and by Nourse L.J. in Stokes v Anderson where it was decided that the respective shares of the parties are not to be determined at the time of acquisition of the property but are left to be determined when their relationship comes to an end or the property sold. Thus, a complete picture of the whole course of dealing is available to the court in order to determine what is fair. The second approach is what was suggested by Waite L.J. in Midland Bank v Cooke whereby the court should undertake a survey of the whole course of dealing between the parties in order to determine what proportions the parties must be assumed to have intended from the outset for their beneficial ownership. Thus evidence of what the parties intended at the time of the acquisition may be inferred from the conduct of the parties while they were living together. ...read more.

In taking this approach, the court emphasised the extent to which the jurisprudence of 'common intention constructive trust' cases has become closely tied to that of estoppel. Estoppel, must be understood as two distinctive phases. The first establishes the case for legal intervention (that there has been a representation made to the claimant, in reliance upon which the claimant acted to her detriment) and the second is the process by which the court decides what it would be 'fair' to award, which is not entirely discretionary but is based on taking into account the belief of the claimant, the extent of the detriment and other relevant factors.10 1 Arden LJ at para 27, Lightfoot v Lightfoot - Brown (2005) EWCA Civ 201 2 www.5sblaw.com - Karren Walden-Smith 3 Waite L.J. in Midland Bank Plc v Cooke at 574. 4 http://www.manches.com/text/pratcices/family/article.php?id=51 - In Springette v Defoe this final step was rejected in favour of a traditional property-based approach. 5 (1986) Ch 638 6 (1970) AC 777 7 (1971) AC 886 8 Lord Chadwick L.J. in Oxley v Hiscock (2004) 3 WLR 715 9 (2006) Feminist Legal Studies 14/2, forthcoming, Anne Bottomley - "From Mrs. Burns to Mrs. Oxley: Do co-habiting women (still) need marriage law? 10 See guidance given in Yaxley v. Gotts [2000] Ch. 102, Gillett v. Holt [2001] Ch. 210 and Jennings v. Rice [2003] 1 P. & C. R. 100. An extensive discussion is found in Bright & McFarlane (2005). ...read more.