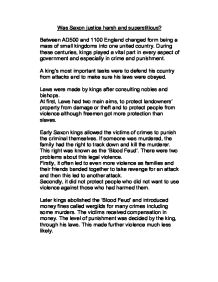 Was Saxon justice harsh and superstitious?

Was Saxon justice harsh and superstitious? Between AD500 and 1100 England changed form being a mass of small kingdoms into one united country. During these centuries, kings played a vital part in every aspect of government and especially in crime and punishment. A king's most important tasks were to defend his country from attacks and to make sure his laws were obeyed. Laws were made by kings after consulting nobles and bishops. At first, Laws had two main aims, to protect landowners' property from damage or theft and to protect people from violence although freemen got more protection than slaves. Early Saxon kings allowed the victims of crimes to punish the criminal themselves. If someone was murdered, the family had the right to track down and kill the murderer. This right was known as the 'Blood Feud'. There were two problems about this legal violence. Firstly, it often led to even more violence as families and their friends banded together to take revenge for an attack and then this led to another attack. Secondly, it did not protect people who did not want to use violence against those who had harmed them. ...read more.

In a modern trial there are lawyers to prosecute and defend, and jury members must have no prior knowledge of the accused. By contrast, at a Saxon trial there were no lawyers to prosecute or defend the accused person. The accuser was the person who claimed to be the victim of the crime. The jury was also different. It was made up of men from the area who probably knew the accuser and the accused. Both the accused and the accuser told their version of events to the jury. It was then up to the jury to decide who was telling the truth. If there was no clear evidence (such as a witness having seen the crime take place) they used their experience of people concerned. If the jury felt the accuser was more honest in general than the accused, they swore an oath that the accused was guilty. The jury's oath taking was called Compurgation. There were times when the jury members could not agree with each other. This was usually in cases of theft or murder when there was no witness. Trial by ordeal was the solution to this problem. ...read more.

on the end of a rope. The rope was knotted above the waist. If the person sank and the knot went below the surface then he was innocent because the 'pure' water had been willing to let this innocent beneath its surface. However, if he and the knot floated then they believed the water was rejecting him because he was guilty. Trial by consecrated bread was taken by priests. The priest first had to pray, asking that he be choked by the bread if he lied. Then he had to eat a piece of consecrated bread. If he choked then he was guilty because God would not let a sinner eat consecrated bread. This might seem a much more lenient ordeal but people believed that God was sure to punish a priest who lied and so it was seen as the most effective or all ordeals. I think that the Saxons used trial by ordeal as a means of finding out whether someone was guilty or not to deter other would be criminals from committing crime. In my opinion, Saxon trials were based on superstition rather than logic because the trials in order to ascertain whether the person was guilty were based on a chance result and were often biased of finding them guilty. 1,257 words ...read more.