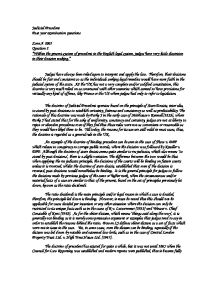 &quot;Within the present system of precedent in the English legal system, judges have very little discretion in their decision making.&quot;

Judicial Precedent Past year examination questions Zone A 2001 Question 2 "Within the present system of precedent in the English legal system, judges have very little discretion in their decision making." Judges have always been relied upon to interpret and apply the law. Therefore, their decisions should be fair and consistent so as the individuals seeking legal remedies would have more faith in the judicial system of the state. AS the UK has not a very complete and/or codified constitution, this doctrine is very much relied on as contrasted with other countries which seemed to have provisions for virtually any kind of offence, like France or the US where judges had only to refer to legislation. The doctrine of Judicial Precedent operates based on the principle of Stare Decisis, inter alia, to stand by past decisions to establish certainty, fairness and consistency as well as predictability. The rationale of this doctrine was made by Parke J in the early case of Mirehouse v Rennell [1833], where Parke J had stated that for the sake of uniformity, constancy and certainty, judges are not at liberty to reject or abandon precedents even if they feel that those rules were not as convenient or reasonable as they would have liked them to be. ...read more.

So, at times, since there are quite a few precedents, when judges decide cases, they tend to choose to follow a precedent which they feel to be more in agreement with. This shows that judges in fact, do possess a certain amount of discretion. It has even been argued that in practice, judges seemed to have first come to decisions or conclusions of their own before actually searching and relying on precedents in line with their decisions to back them up. In the case of Merritt v Merritt [1970] CA, Balfour v Balfour [1919] was a prima facie precedent. Yet, the Court of Appeal held that a material fact, which was marital relationship, differs in both cases, thus Balfour was not a binding precedent. Lastly, in extremely rare occasions, a judge may choose not to follow a binding precedent if a particular point of law has been taken on appeal to the House of Lords and the lords have not yet ruled. Such was the case in Kingscastle v Owen-Owen (1999) CA where Hirst LJ declined to rule until the case of Fitzpatrick was decided. Therefore, basically, although it may well seem that judges has little discretion when interpreting and applying the law due to the nature of the doctrine of judicial precedent, it is only to a certain degree that judges are so bound. By: Sylvia Ching-Ye Kong Date: 1 August 2004 ...read more.

A good essay that considers the relevant aspects to precedent in some detail.

The student could improve this essay by citing a few cases and detailing some of the facts of the important precedents. This is particularly important when you have cases that relate, in some way, to one another.