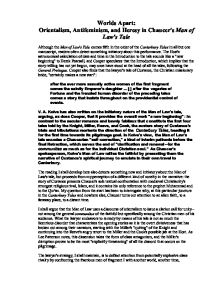 Worlds Apart: Orientalism, Antifeminism, and Heresy in Chaucer's Man of Law's Tale Although the Man of Law's Tale comes fifth in the order of the Canterbury Tales in all but one manuscript, readers often detect something initiatory about this performance. The Host's astronomical calculation of date and time in the Introduction to the tale sounds like a "new beginning" to Derek Pearsall, and Cooper speculates that the Introduction, which implies that the story-telling has not yet begun, may once have stood at the head of all the tales, following the General Prologue. Cooper also finds that the lawyer's tale of Custance, the Christian missionary bride, "certainly makes a new start": after the ever more sexually active women of the first fragment comes the saintly Emperor's daughter ... [;] after the vagaries of Fortune and the frenzied human disorder of the preceding tales comes a story that insists throughout on the providential control of events. V. A. Kolve has also written on the initiatory nature of the Man of Law's tale, arguing, as does Cooper, that it provides the overall work "a new beginning": in contrast to the secular romance and bawdy fabliaux that constitute the first four tales told by the Knight, Miller, Reeve, and Cook, the austere story of Custance's trials and tribulations reorients the direction of the Canterbury Tales, heading it for the first time towards its pilgrimage goal. In Kolve's view, the Man of Law's tale encodes a Chaucerian "self-correction," a kind of interim palinode before the final Retraction, which serves the end of "clarification and renewal--for the communitas as much as for the individual Christian soul." As Chaucer's spokesperson, Kolve's Man of Law rallies the faithful by presenting them the narrative of Custance's spiritual journey to emulate in their own travel to Canterbury. The reading I shall develop here also detects something new and initiatory about the Man of Law's tale, but proceeds from my perception of a different kind of novelty in the narrative: the story of Custance ...read more.

Gower's narrator, Genius, however, characterizes his tale in advance as moral exemplum, not as history or biography. Genius terms the Constance narrative a "tale of gret entendement" (CA 2.584) and offers it as an example of correct behavior in response to envy and detraction. He too begins the tale with reference to Constance's early years in Rome, but truncates the discussion of sources and focusses instead on the worthiness of Constance's father, the emperor Tiberius Constantius, and Constance's own good name, setting the stage for the attacks by Envy and Backbiting in the guise of the two evil mothers. Unlike Trevet and Genius, whose first episodes feature Constance, the Man of Law initially ignores her, casting his opening focus instead upon the group of Syrian merchants that has travelled to the Christian community of Rome either for business or leisure ("for chapmanhood or for disport," II.143). Whatever the merchants' motivation, their passage from Syria to Rome is unremarkable, historically no doubt a commonplace occurrence given the physical proximity of the two Mediterranean locations. Their merchandise ("chaffare," II.138) may be novel, but in themselves the merchants evoke little curiosity. In fact, the Man of Law goes out of his way--beyond Trevet and Gower-- to underline the extent to which the Syrians exhibit western values and attitudes. He observes that the merchants are not merely rich and successful, but trustworthy and honest ("sadde and trewe," II.135). These are indeed good men, as seen through western eyes. Like Mandeville, the Man of Law searches for commonalities; at least at the outset of his tale, he makes no mention of the cultural and religious differences--the disparitas cultus--between Syrians and Romans. Instead, the Man of Law works to establish the closeness, both geographically and culturally, between the two as his opening act. His next move is to recount how these merchants come to learn of Custance's reputation for goodness and beauty and carry word of it back to their ruler, the sultan. ...read more.

Neither the sultaness nor Donegild slays Custance, for the obvious reason that her absence would halt the tale. At the same time, however, one might observe in this narrative pattern the interdependence of the female characters as the Man of Law situates them. In their "mannishness," their transgressive proximity to man, the sultaness and Donegild provide patriarchal interests justification for creating and venerating the figure of Custance, the clearly distanced female Other. The former figure, the virago, is used to promote the establishment of the latter, and while both the sultaness and Donegild are eventually eradicated from the narrative, the rhetoric of proximity might readily supply a host of substitutes, beginning with Eve, to continue justifying a Custance. VI My interpretation of the Man of Law's narrative as a cautionary fable of transgressive proximity suggests a way of reading the disputed Epilogue to the tale. As I shall argue here in conclusion, this endlink mimics the tale proper and performs its own corrective act of resituation. Having heard the lawyer's tale of unseen enemies who lurk nearby, the Host and the Shipman join forces to echo its narrative dynamic: they fabricate yet a third type of transgressor within their ranks and then silence him. In the Epilogue to the Man of Law's tale, Harry Bailly turns to the Parson and "for Goddes bones" (II.1166) requests of him the next tale. The Parson rebukes Harry for swearing so sinfully, and the Host, alluding to the aversion to oaths among Lollards, retorts with a charge of heresy: "I smelle a Lollere in the wynd" (II.1173). Although Harry is prepared to entertain a performance by "this Lollere" (II.1177), the Shipman is not. "`That shal he nat!' / Seyd the Shipman, `Heer schal he nat preche"' (II.1178-79). The Shipman blocks the Parson's tale on the grounds that this heretic Lollard might corrupt the faithful. Although Lollardy, an actual heresy in canon law, and Islam, popularly regarded as heretical in spite of Church law to the contrary, were perceived as distinct, nevertheless Harry's accusation of the Parson seems more than casually related to the Man of Law's narrative. ...read more.