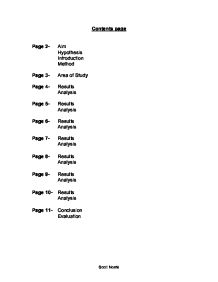 For example there are people 5 people from central London. Central London isn't that close to Heathrow, but because they are in the area for whatever reason they are still affected. 5 This Graph shows how people travelled to the location they were surveyed at. This shows a lot more people use cars to travel around this area. This means if there is an increase in traffic because of the Terminal. People will find it much harder to get around. This shows the hypothesis is wrong because there are more people who drive cars in the local area so it will affect them because of traffic, but if the person catches the train, rides their bike or walks, they will not be affected by traffic. 61 people use a car to travel in the area and 18 people use the bus, there are 12 people who use the train, 10 people who ride their bikes and 10 people who walked. That's 32 people who will not be affected by traffic. 6 This Graph shows why the person was in the area. If traffic increases in the area people will find it much harder to do their daily tasks. This proves the hypothesis is wrong because people are in the area for different reasons, so it will affect them in different ...read more.

Also in the last graph 64 people think it will not affect people in the local area, only 48 think it will. So this proves that the majority do not agree with the hypothesis. Evaluation The study went well because I asked all different types of people. I asked over 100 people from Staines, Ashford and Shepperton, which are in the surrounding area of Terminal 5 which is what the hypothesis is on about. I also asked around the same amount of male and females. I asked exactly half from family and non-family households. I also asked people from all different types of age ranges. I could have improved it by asking people in other areas around terminal 5, such as Stanwell, which is closer than the three areas I chose. I also could asked people on the weekend, as well as on weekdays, because different people would be in the area on the weekend (such as Children who would usually be in school on weekdays and people who aren't working will be in the area for leisure purposes). Limitations to my study were that I did not ask all surrounding areas of Terminal 5 because in different areas, people will have different opinions. Other limitations are that I did not get to survey many young children because it was on a school day, so most children were in school. 11 ?? ?? ?? ?? Scott Norris ...read more.