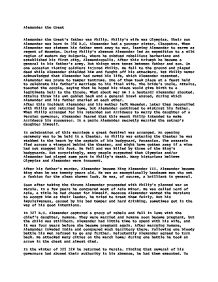 Alexander the Great's father was Philip. Philip's wife was Olympias. Their son Alexander was born in 356 B.C. Alexander had a younger sister, Cleopatra. When Alexander was sixteen his father

Alexander the Great's father was Philip. Philip's wife was Olympias. Their son Alexander was born in 356 B.C. Alexander had a younger sister, Cleopatra. When Alexander was sixteen his father went away to war, leaving Alexander to serve as regent of Macedon. During Philip's absence Alexander led an expedition to a wild region of modern day Bulgaria, where he subdued rebellious barbarians and established his first city, Alexandropolis. After this triumph he became a general in his father's army. But things were tense between father and son. On one occasion rioting soldiers injured Philip. He fell to the ground and played dead while Alexander shielded him and fought off his attackers. Yet Philip never acknowledged that Alexander had saved his life, which Alexander resented. Alexander was prone to temper tantrums.

In celebration of this marriage a great festival was arranged. An opening ceremony was to be held in a theater. As Philip was entering the theater he was stabbed in the heart by the captain of his bodyguard, Pausanias. The assassin fled across a vineyard behind the theater, and might have gotten away if a vine had not snagged his foot. He fell and was killed by three of the king's bodyguards. Not surprisingly, many people suspected that Olympias and/or Alexander had played some part in Philip's death. Many historians believe Olympias and Alexander were innocent.

After his father's murder, Alexander became King Alexander III. Alexander became king when he was twenty years old. He was an exceptionally handsome man who set a fashion for the clean shaven look. He was, of course, a brilliant in general.

In the winter of 325 324 he returned to Persia. Finding that several of his governors had abused their authority in his absence, he had them executed. To promote harmony between his people and the Persians he ordered eighty of his most important men to marry highborn Persian women in traditional Persian wedding ceremonies. He himself married King Darius's daughter. His best friend, Hephaestion, married Barsine's sister Drypetis. Alexander also began promoting Persians to high ranking positions in his army, saying that Persians and Macedonians should share the empire. His efforts to create unity failed; even the marriages between his men and the Persians mostly broke up after Alexander's death.

In the fall of 324 Alexander's beloved friend Hephaestion died. Alexander was heartbroken. The following summer Alexander too became ill, and on June 13 he died in Babylon. He was 32. Modern historians have long suspected that he died from malaria, but recently it has been suggested that the culprit was typhoid fever.