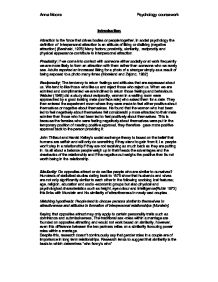 Attraction is the force that drives bodies or people together, in social psychology the definition of interpersonal attraction is an attitude of liking or disliking.

Proximity; If we come into contact with someone either socially or at work frequently we are more likely to form an attraction with them rather than someone who we rarely see. Adults reported an increased liking for a photo of a stranger simply as a result of being exposed to a photo many times (Moreland and Zajonc, 1982)

Reciprocity; The tendency to return feelings and attitudes that are expressed about us. We tend to like those who like us and reject those who reject us. When we are admired and complimented we are inclined to return those feelings and behaviours. Walster (1965) did a study about reciprocity, women in a waiting room were approached by a good looking male (confederate) who asked them for a date. They then entered the experiment room where they were made to feel either positive about themselves or negative about themselves. He found that the women who had been led to feel negatively about themselves felt considerably more attracted to their male admirer than those who had been led to feel positively about themselves.

We are going to use  a directional hypothesis as we can predict the out come of the study due to similar studies to this having been done before.

We will use a significance level of 5% (P ≤ 0.05) As this is the standard level for psychological research to be tested at. This means that out of every 100 pieces of data collected 5 will be due to chance.

We are going to use a non experimental method due to the nature of the research. There will be no IV or DV because we are not doing a true experiment we will be using a correlational design to complete our study. There are advantages to conducting the study in this way:

As well as disadvantages:

They were then read a set of standardised instructions (see participant variability) telling them how to do the experiment: ‘could you please rate these photographs in order of attractiveness starting with the most attractive first’ They were shown the male photos and asked to rank them in order of attractiveness, by sorting the photos which had been cut so that they are separated and can be lined up on a table. We recorded them in our table 1-10 in rank order, 10 being the most attractive, giving us ordinal data. Once they had completed this they were shown the female photos and asked to rank them in order of attractiveness (or vice versa if they are in group B. We are using counter balancing to balance the effects of practice and fatigue)We will then show them the actual couples and tell them who they said were the most and least attractive and who they were married to. They will be told what their results indicate. We will also explain to them the true nature of the experiment and what the results are that we are looking for.The participants will then be thanked for helping us with our study.
...read more.