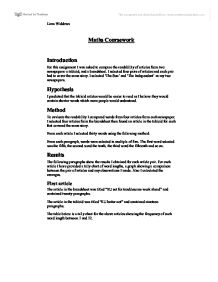 I predicted that the tabloid articles would be easier to read as I believe they would contain shorter words which more people would understand.

From each article I selected thirty words using the following method:

From each paragraph, words were selected in multiple of five. The first word selected was the fifth, the second word the tenth, the third word the fifteenth and so on.

Again, the averages are very similar.

The article in the broadsheet was titled “Potter’s magic spell turns boys into bookworms” and contained twelve paragraphs.

The article in the tabloid was titles “Potter coins it like Beckham” and contained fourteen paragraphs.

The table below is

I could also use more than one of each paper therefore giving me an even accurate result and maybe adding more tests in like the sentence length etc.

I concluded that the broadsheet had the best readability. This is because it uses more, shorter words than the tabloid. The tabloid uses more of the longer words as shown by the Summary Word Length graph.

This means that my hypothesis was incorrect because I predicted that the tabloid would use more of the shorter words even if the results were only marginally different.

I was quite surprised by theses results because the broadsheets are read more by professional people and the tabloids more by manual workers.

The reasons for these results may be the type of words that some newspapers have e.g. Wright-Phillips could be classed as either one word or two words. Also, I wasn’t sure whether to use numbers e.g. 2007.

I wanted to make different types of graphs but because of the type of investigation I am doing it limits it, e.g. I couldn’t use a stem and leaf diagram as the chances are it wouldn’t work.