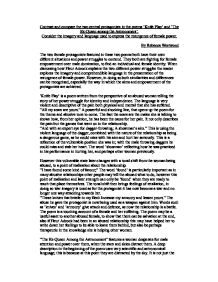 Contrast and compare the two central protagonists in the poems 'Knife Play' and 'The Ex-Queen among the Astronomers'. Consider the imagery and language used to express the resurgence of female power.

Contrast and compare the two central protagonists in the poems ‘Knife Play’ and ‘The Ex-Queen among the Astronomers’.

Consider the imagery and language used to express the resurgence of female power.

The two female protagonists featured in these two poems both have their own different situations and power struggles to contend. They both are fighting for female empowerment over male domination, to find an individual and female identity. When discussing how Fleur Adcock explains the two different power struggles the reader explores the imagery and comprehendible language in the presentation of the resurgence of female power. However, in doing so both similarities and differences can be recognised, especially the way in which the aims and empowerment of the protagonists are achieved.

‘Knife Play’ is a poem written from the perspective of an abused woman telling the story of her power struggle for identity and independence. The language is very violent and descriptive of the pain both physical and mental that she has suffered.

“All my scars are yours.” A powerful and shocking line, that opens up the poem for the theme and abusive tone to come. The fact the scars are the males she is talking to shows how, from her opinion, he has been the cause for her pain. It not only describes the pain but the games that went on in the relationship.

“And with an expert eye for dagger-throwing; A showman’s aim.” This is using the violent language of the dagger, combined with the nature of the relationship as being a dangerous game, as he could miss with his aim and hurt her seriously.

‘She plucks this one or that among the astronomers,’ she does not care which male, she only cares that she will dominate and have the power.

Another feature of the structure that shows a difference in the flow is the use of enjambment between stanzas. In ‘Knife Play’ this is a key feature both in and between stanzas, keeping the poem continually running, not in separate parts. This use of enjambment disguises the regular rhythm and rhyme patterns. This helps the reader not be distracted by how well the words rhyme but keeping the interest continuing into the next stanza. As the structure reflects the restriction in both, perhaps the regular tight stanza structure is a representation of the scientific and precise astronomers in ‘The Ex-Queen Among the Astronomers’.

Language in both is very accessible, which means that anyone can read and interpret the poems. In both semantic fields are created in the theme of the poem, which creates very graphic ideas about power. Although the two expressions of power are very different. The semantic field in ‘Knife Play’ is one of abuse. Words such as ‘burn’, ‘razor marks’, ‘piercing’ and ‘cutting’. Which are very fierce and aggressive words that sum up the physical abuse this protagonist sustains. Where as the semantic field created in ‘The Ex-Queen Among the Astronomers’ is one of sexuality, which is used for the resurgence of female power. ‘she sucks at earlobe, penis, tongue mouthing the tubes of flesh;’ this is a very graphic and sexually charged style of writing; this sexuality is what this protagonist uses to gain power.

The language used reflects the imagery. For example, the imagery of abuse created by the language used in “Knife Play” is vital to the expression of feeling. The imagery used in the resurgence of power gives examples of the relationship. For example, the way in which it is seen as a dangerous game, with the possibility of hit and miss daggers. “Oh I could dance And dodge, as often as not, the whistling blades, Turning on a brave performance”. This imagery shows the reader that the relationship was a show and that the protagonist had to dodge things hurting her, perhaps physically and mentally, or perhaps accusations.

Sexual imagery is used in “The Ex-Queen Among the Astronomers” in the expression of the resurgence of female power. The ways in which the female is being described as being on top of his body and being the only thing I his eye line is an example of domineering imagery, such as the woman on top, therefore controlling movement. “and is become his canopy, his occultation;” The sexual imagery of foreplay is how the female has regained her power, the imagery is very graphic and almost dominating in itself of the reader. It grabs the reader’s attention and dominates the focus of the poem.

In the presentation of imagery in this poem language is used to create imagery. Words such as “penis” and “tongue” are the words that grab the attention of the reader, they help to create intriguing imagery.