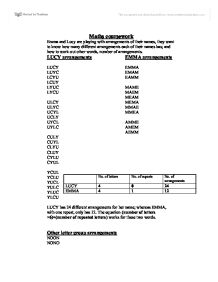 LUCY has 24 different arrangements for her name; whereas EMMA, with one repeat, only has 12. The equation (number of letters ×6)÷(number of repeated letters) works for these two words.

Rather than trying to guess random formulas and try to make them work I will, get more data.

The formulae can’t work for any other letter words, and the 4 letter word equation didn’t work for 2 repeats in a 4 letter word. So forget repeats first, I’ll see if I can find an equation for no repeats that works for all by focussing on no repeated lettered words.

24÷6. I had to use factorials before, and it seems like they are needed again. As said earlier 6 can be expressed as 3!, so number of letters!÷ number of repeats!.

So to find the number of arrangements of any word you need to use the equation. n!÷r!Where n is the number of letters in the word and r is the amount of times a number is repeated. I.e. In EMMA n=4 and r=2!.