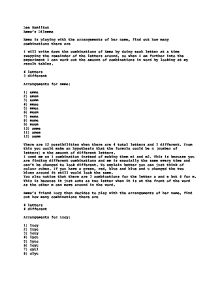 Emma is playing with the arrangements of her name, find out how many combinations there are

I will write down the combinations of Emma by doing each letter at a time swapping the remainder of the letters around, so when I am further into the experiment I can work out the amount of combinations in word by looking at my result tables.

There are 12 possibilities when there are 4 total letters and 3 different. From this you could make an hypothesis that the formula could be n (number of letters) x the amount of different letters.

I used mm as 1 combination instead of making them m1 and m2. This is becuase you are finding different combinations and mm is esacially the same every time and can’t be changed to look different. To explain better you can just think of colour cubes. If you have a green, red, blue and blue and u changed the two blues around it still would look the same.

You also notice that there are 3 combinations for the letter a and e but 6 for m. This is because it just acts as two letter when it is at the front of the word as the other m can move around in the word.

What if there was a five-letter word? How many different arrangements would there be for that?

As I have found that there were 24 arrangements for a 4 letter word with all different letters and that there were 6 ways beginning with one of the letter I predict that there will be 120 arrangements for lucyq, 24 for a, 24 for b, 24 for c; etc. 120 divided by 6 (number of letters) equals 24. Previously in the 4-letter word, 24 divided by 4 equals 6, the number of possibilities there were for each letter. For the sake of convenience I have used lucy and put a q in front of it to show that there are 24 different possibilities with each letter of a 5 lettered name being all different.

This word has 120 combinations.  I can see that the numbers of possibilities for different arrangements are going to dramatically increase as more different letters are used.

So as a general formula for names with n number of letters all different I have come up with a formula. With Lucy's name; 1x2x3x4 = 24. With qlucy; 1x2x3x4x5 = 120. However this is expressed as factorial. If I key in (lets say the number of letters all different) factorial 6 it gives me 720, with makes sense because 720 divided by 6 equals 120 which was the number of arrangements for a 5 letter word and it continues to fall in that pattern.

I have come to this formula by looking at my result tables from previous investigations. I worked out earlier that n! Is how to work out how many combinations there are in that certain amount of lettered word and now have found out how to work out words with repeated letters and some more than others. E.g. If there is a 4 of one letter in a word it would be 4! And if there was 3 of another it would be 3!. You then times these two together and they are n! is divided by the sum of them.

Five letter words like abcde; this has 1 of each letter (no letters the same)

All these have been proved in previous arrangements. This shows that my formula works!

Mississippi can be shown as:

This can be expressed as: