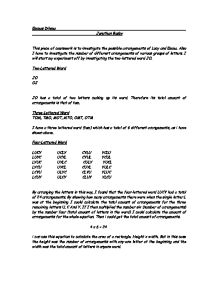 JO has a total of two letters making up its word. Therefore its total amount of arrangements is that of tom.

I have a three lettered word (tom) which has a total of 6 different arangements, as i have shown above.

By arranging the letters in this way, I found that the four-lettered word LUCY had a total of 24 arrangements. By showing how many arrangements there were when the single letter L was at

This is a table to show this:

Four-Lettered Word- Two of any one letter

I have found out that from any four-lettered word i will get 24 different arrangements.

I will check doubled words.

For a 4 Lettered word there are 24 arrangements in total, as my results show,  next i will investigate is the results of having two of the same letters in any-one word and its effects on the outcome of the number of arrangements. I will firstly look at the four-lettered name Emma. As you can see two of its letters are  the same therefore we have to treat them as one.

This formula can be used to work out as many letter repeats, as you like.EXAMPLE

In the word banana there are 6 letters altogether making it 6x5x4x3x2x1, which is equal to the formula of 6!  There are 3 A’s repeated and also 2 N’s. Also there is one b.! In the formula.

It is possible to see from my research that overall as the number of letters in a word increases, the number of combinations increases. If a letter is repeated in a word, that word has less combinations than another word of equal length with no repeated letters. If i did the experiment again i would spend more time with more variety of names. i would use more double letters and look for anu other formulaes.This would mean that into more detail and check the formula for the larger words.