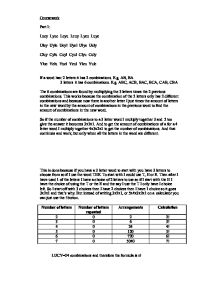 This formula is demonstrated in the table below.

However, this formula was ineffective when trying to work out the number of arrangements for a word, which has three letters the same in it, and all the rest different.

These would all be different arrangements but seeing as they aren’t they have to be cancel out from 4!

When there is only one letter repeated, the formula obtained was n!/y! (y being the number of repeated letters)

Therefore, for words where more than one letter is repeated, I will try the formula

This equation appears to be correct.