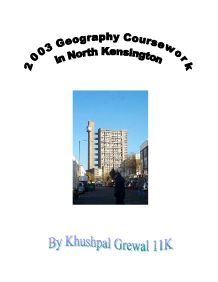 North Kensington can be classified as a low-class residential area as defined by the Hoyt Sector Model of urban land use to the extent that the housing extends in a linear fashion along transport route ways formally of industrial significance.  These main routes are, in historical order, the Harrow Park, the Grand Union Canal, the Great Western Railway, all pre-1900.  In the early 20th century, the Metropolitan Railway was added and in the second half of the 20th century the flyover (the West Way) being the main road from London to Oxford and Central Wales.  Therefore this area has many of the housing and environmental problems of an inner city area, although it is also an area near enough to the city centre to be considered a zone of transition and with a strong potential for gentrification.  This is a case of settlement being linked to industry and transport, not the expansion of a village or other historical nucleus.  It is also an area of dense population as can be seen from the census data.

The fieldwork was centred on four distinct areas of North Kensington contained within the Golbourne and Colville Wards.

The first area was two parallel streets of housing – Fermoy Road and Hormead Road in the Golbourne Ward.

The possible techniques that I could use when attempting to gather the required information from the area of North Kensington to help me prove or disprove my hypothesis are: -

The fieldwork techniques that I will be using while I am there to help me with my investigation will be to hand out questionnaires, make a Bi Polar analysis of each of the four areas to rate the attractiveness of a range of locations on a 0-10 scale, annotating sketch maps of each area, and also take photographs so that I can identify the natural attractions and detractions of each area.

I will be going to my designated area wherever that will be, and in my group of 10 people we will complete 2/3 questionnaires each by asking members of the public roaming the street that we are on and this will come to a total of 25 questionnaires.

A 100 people were interviewed at a time of day (late morning to early lunchtime) when it can be reliably assumed that the majority of the working population both male and female would be away from the area at their places of work.  This would bring the risk of giving too much weight to the opinions of pensioners, housewives, the unemployed, and the chronically ill which could conceivably distant the findings.  For example, it is possible that the collective attitude of these groups could be either more or less negative than the attitudes of the absent working population.

The criteria used for the quality assessment can be criticised for certain inconsistent details such as areas of repetition and overlapping and mixing more weighty points with more trivial ones.

To achieve a higher standard of perfection in the data collected, it would help to carry out the interviews and visits at different hours of the day including evenings, different days of the week including weekends, and perhaps covering the four seasons of the year  This would give the data greater reliability and make them more convincing.

The criteria employed might also benefit from a more streamline grouping under areas such as security, anti-social behaviour, housing defects, and non-housing aspects of the environment such as greenery, playgrounds, benches, and street furniture.

However, I still believe that the conclusions arrived at are valid, especially the negative perception of area 2, which would be unlikely to be modified however more perfect the method of data collection could be made. 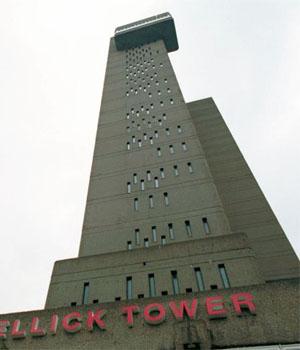