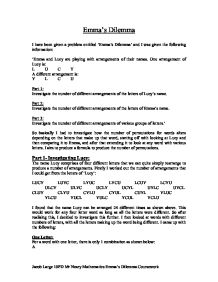 I have been given a problem entitled 'Emma's Dilemma' and I was given the following information: 'Emma and Lucy are playing with arrangements of their names

I have been given a problem entitled ‘Emma’s Dilemma’ and I was given the following information:

‘Emma and Lucy are playing with arrangements of their names. One arrangement of Lucy is:

A different arrangement is:

Investigate the number of different arrangements of the letters of Lucy’s name.

Investigate the number of different arrangements of the letters of Emma’s name.

Investigate the number of different arrangements of various groups of letters.’

I found that the name Lucy can be arranged 24 different times as shown above. This would work for any four letter word as long as all the letters were different. So after realising this, I decided to investigate this further. I then looked at words with different numbers of letters, with all the letters making up the word being different. I came up with the following:

For a word with one letter, there is only 1 combination as shown below:

Arrangements with a Repeated Letter:

So the formula calculating the number of arrangements (Y) for a word, such as Emma with X letters but X-1 different letters is:

So we can look in general at how having letters the same affects the number of arrangements. So far we have looked at ABCD and ABBC.

When all the letters are different, the amount of permutations is not restricted and you are free to move the letters into any position.

When two of the letters are the same, the number of restrictions is reduced by half. When listing the arrangements you, you can’t complete half of the ones you would do if the two letters were different as the letters have already been in that position, even if it may have been the first B in the word for example and not the second B, the arrangement can’t be completed as the two Bs are not distinguished between.

This word is made of three letters, all of which are the same. Therefore there can be no possible arrangements other than 1:

This word is made up of four letters, three of which are repeated. This should greatly restrict the number of arrangements as there is only one letter that can move round as the rest are the same. Below are the 4 arrangements that could be produced:

The word ‘ABCCC’ is a five letter word comprised of three letters that are the same. The following 20 permutations could be produce using this word:

So if we put this into a table in order that the data is easier to view:

So we can now look at this data in relation to the formula I produced earlier for words with two repeated letters. The formula stated that the number of combinations (y) would be equal to letters in the word (x) factorial, divided by two (y=x!/2). So if we look at the equation and if it would be correct in a word where there are three of the same letters.

I then used this equation and worked out if it was correct or not, when looking at words with a letter that occurred three times:

This too was not the answer, but did bring up a clear pattern. The answer to the formula ‘Y = X! / 3’, is exactly double the correct answer on all three examples I have used. Therefore if we look at the formula instead of dividing the factorial of x by three, we can divide it by two and get the correct answer as shown below:

So looking at the word I can then apply the same rules for this word. The word is made up of 5 letters so we

So we then put the two values together and workout the answer for the number of permutations for AABBC as follows:

This proves that the formula that I came up with is correct for working out the number of different arrangements for any word no matter what letters it contains.

The final general formula is shown below:

Y is the number different permutations.

X is the number of letters in the word.

A is the number of repetitions of any letter.

B is the number of repetitions of any second letter.

C, D, E etc. is the number of repetitions of the remaining letters.

So applying this formula I can work out the number of different permutations for any word as shown below:

There are 1260 different permutations for the word AAAABBBCC.

There are 3153150 different permutations for the word AAABBBBBCCCCCDDDD