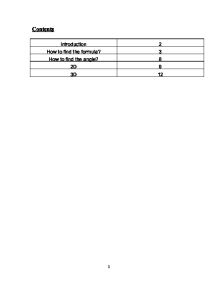 Contents Introduction 2 How to find the formula? 3 How to find the angle? 8 2D 9 3D 12 Introduction I will start my course-work by explaining off what the task is that I'm going to do. I have to find the number of diagonal of any 2Dimensional or/and 3Dimensional. A diagonal is a line drawn from one vertex (corner) of the shape to another, which is not an edge of the shape. Then, I will write some short sentences describing the task along with the diagram, which will be useful, including what I hope to find. To solve this problem, I will explain what I am going to do by starting with simple cases. For example, Triangle then Square then Pentagon and so on. What I think will happen and show all my calculation. In order to show the patterns, I could draw graphs to show it, including the results in the table. I must describe all the patterns and rules I find, explain each one clearly and show that my rules work by doing another examples of it. If I find the rules or the pattern, I will try explaining why they work. For example, If I discover that a number patterns goes up in 4s, my task may involve as 4-sided shape that causes this. ...read more.

This can Also be proved by illustrating the equation on the graph, creating a curve. I have also established that the top triangular half of the 2D pattern Always turns out to be a square number. If we now look at the 3D pattern, the equation I achieved for it Has turned out to a cubic equation. This can be proven through the Constant, again a necessary characteristic of any cubic equation And also the fact that its 1st value must be cubed and it's second Squared. If we drew a graph we would get a curved graph in which The line falls steeply, levels off and then falls again. The Differentiation Method developed by Jean Holderness played a Very important role in this investigation. It helped us to gain Knowledge of any pattern and anything that would help in the investigation, Giving us our constant, but most importantly it gave us the equation On which to base our solutions. It was: An<sup>2</sup> + bn + c This proved very helpful. To find our equation we then substituted in different values which We could find in our differentiation table. I have concluded that both the equations proved to be very successful. Therefore the equations are: For the 2D pattern the equation is; 2n<sup>2</sup> - 2n + 1 For the 3D pattern the equation is; 1 ...read more.