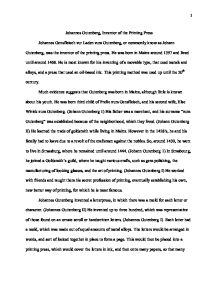 Johannes Gensfleisch zur Laden zum Gutenberg, or commonly know as Johann Gutenberg, was the inventor of the printing press. He was born in Mainz around 1397 and lived until around 1468. He is most known for his inventing of a movable type

Johannes Gensfleisch zur Laden zum Gutenberg, or commonly know as Johann Gutenberg, was the inventor of the printing press. He was born in Mainz around 1397 and lived until around 1468. He is most known for his inventing of a movable type, that used metals and alloys, and a press that used an oil-based ink. This printing method was used up until the 20th century.

Much evidence suggests that Gutenberg was born in Mainz, although little is known about his youth. He was born third child of Frelie zum Gensfleisch, and his second wife, Else Wirick zum Gutenberg. (Johann Gutenberg 1) His father was a merchant, and his surname “zum Gutenberg” was established because of the neighborhood, which they lived. (Johann Gutenberg II) He learned the trade of goldsmith while living in Mainz. However in the 1428’s, he and his family had to leave due to a revolt of the craftsmen against the nobles. So, around 1430, he went to live in Strassburg, where he remained until around 1444. (Johann Gutenberg 1)

John Gutenberg was most known for creating “letters of indulgences” and a new version of the Bible. Both were printed in Mainz in 1454, and are the earlist known products of this new art. (Hayes)  Gutenberg is most famous for his printing of Bibles, especially for the Catholic Church. Actually, his first goal was to mass-produce indulgences, which were printed slips given out by the Catholic Church, which would take away temporal punishments in purgatory for sins committed in this life; however these were extremely expensive, and only the wealthy could afford them. In 1455 he produced and sold copies of a two-volume Bible, also known as Biblia Sacra, for up to 300 florins each. However, it was much cheaper than the previously handwritten Bibles that took monks up to 20 each year to write. (Johann Gutenberg II) The most famous Bible is called the Bible of 42 Lines, more commonly called the Gutenberg Bible. This Bible is the oldest Bible in the western world, and was completed in 1446.