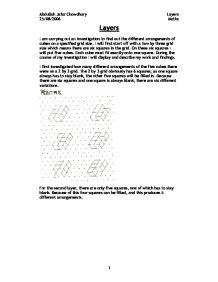 This is half of the total number of arrangements when the formula is divided by 1 and when there is only one cube missing. The formula is: S(S-1)(S-2)(S-3)(S-4)(S-S+1) To test this formula out, I saw that on the first layer of cubes, when there are only 2 cubes missing, the total number of arrangements is 15. Because there are only four cubes to work one, that means the scond layer will have four different arrangements. So 15*4 = 60. Now, if you follow the formula, replacing the letters with numbers the formula turns out to be: 6(6-1)(6-2) This can be calculated to give the answer: 60. This shows that the formula works. To further test the formula, you can see that it is apparent that, because of only one square being missing from the second layer onwards, you can see that the third layer will have 3 arangements. So this is 15*4*3 = 180. After I have incorporated this into the formula (6(6-1)(6-2)(6-3)) the answer I got was 180. This is sufficient eveidence that my theory and formula are all correct. In conclusion, I think I carried out my investigation accurately. I believe I should have looked into a more consice formula which would have solved all everything. Due to the time constraint I could not do this. ?? ?? ?? ?? Abdullah Jafar Chowdhury Layers 25/08/2006 Maths 1 ...read more.