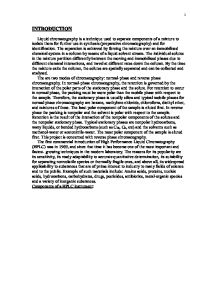 Liquid chromatography is a technique used to separate components of a mixture to isolate them for further use in synthesis (preparative chromatography) and for identification.

Liquid chromatography is a technique used to separate components of a mixture to isolate them for further use in synthesis (preparative chromatography) and for identification. The separation is achieved by forcing the mixture over an immobilised chemical system in a column by means of a liquid solvent stream. The individual solutes in the mixture partition differently between the moving and immobilised phases due to different chemical interactions, and travel at different rates down the column. By the time the mixture exits the column, the solutes are spatially separated and can be collected and analysed.

The values for the symmetry of the peaks for the three compounds do not mirror those for efficiency. There does not seem to any trend.

Above 1000µl the values for efficiency increase dramatically and the peaks start splitting so are regarded as anomalous. Perhaps the reason is an overloaded column.

The peak for Acetone is very small and hardly distinguishable due to the large number of peaks around its retention time, including a strong negative peak, which could affect its efficiency. The acetone could have evaporated due to its high volatility. The presence of acetone is to give t = 0 and hence to calculate k` values and so the peak can be ignored as it will not affect the other peaks and their efficiency. The retention time for this unretained peak is 1.32 min.

The symmetry of the peaks for all the compounds generally tends to decrease as the concentration is increased from the most dilute to the most concentrated solution. This indicates that the efficiency decreases as the peaks are becoming more asymmetric and the column is overloading. It could be suggested that the results for symmetry mirror those of efficiency. There is a significant decrease in symmetry between the 1 in 5 and the standard solution, where there is a large decrease in the number of plates/m. Most of the symmetry values are below 1, indicating that b>a and a tailing effect observed.

As in 1.B each volume was tried on a larger loop to see if there was any effect (See results table)

All the results for theophylline are regarded as anomalous due to the peak having a pronounced shoulder and a strong negative peak just before it. Thus, the number of plates/m for theophylline is very low and the symmetry has negative values (see chromatograms). The reason for the presence of the shoulder is unknown. It was first thought to be a contaminant on the column but the column was flushed with water and acetonitrile to no avail. An impurity in the sample could be another cause. This did not occur in the other columns, however.

Again different size loops were used for each volume to see whether loop size had any effect. The above results show a significant decrease in efficiency when a larger loop is used for a small volume. The most accurate values for efficiency in plates/m are to be converted into % and plotted.

The % efficiency is calculated relative to the 5µl volume, as the peaks on the 2µl chromatogram are very small. Even though 2µl and 5µl injected on the 5µl loop has a higher efficiency value than that of the 2µl and 5µl on the 20µl loop, the latter values are more in line with the other values and are taken as the efficiency results.

The % efficiency for caffeine remains fairly stable from 5µl to 200µl but there is then a significant decrease of  ~43% from 200µl to 500µl. This suggests that this is the concentration region in which the column becomes overloaded.

For sodium benzoate, the % efficiency again remains relatively constant up until 200µl although there is a decrease of  ~10% between 100µl and 200µl and then a further decrease of ~35% from 200µl to 500µl. It could be argued that the column starts overload with sodium benzoate at a lower volume than caffeine but shows a significant decrease in efficiency in the same concentration region.

Symmetry values for the peaks tend to follow the same trend as efficiency- staying constant then dropping off at high volumes. This indicates that the peaks are becoming more asymmetric as the column is overloading.

Other peaks present in the chromatogram are regarded as impurities.Increasing the concentration of the samples any further posed a problem as they started to come out of solution. It was ensured that the solutions were made before this occurred.The scope of this project is extremely large and if time was not a limitation it could be extended further. Varying the sample solvent to increase concentration levels, pH and % organic of the mobile phase could be investigated. These parameters could then be optimized to give maximum yield and purity. Manual fractions may be collected and analytical samples run.

I would like to thank Dr. R. S Ward (the project supervisor) and Stanley Szajda (laboratory technician) for their kind help and support throughout the duration of the project. I would also like to direct my gratitude towards Jones Chromatography, represented by Dr. Neil Herbert, who provided the project, supplied all columns and samples and gave appreciated guidance during the seven-week period.