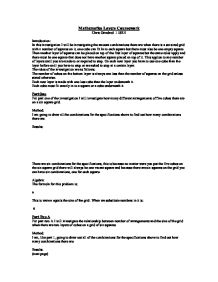 In this investigation I will be investigating the amount combinations there are when there is a set sized grid with x number of squares on it, one cube can fit In to each square but there must also be one empty square. Then another layer of squares can be placed on top of the first layer of squares but the same rules apply and there must be one square that does not have another square placed on top of it. This applies to any number of layers until you are made to or required to stop. On each new layer you have to use one cube than the layer before until you have to stop or are asked to stop at a certain layer.

The rules of the investigation are as follows:

The number of cubes on the bottom layer is always one less than the number of squares on the grid unless stated otherwise.

Each new layer is made with one less cube than the layer underneath it.

Each cube must fit exactly in to a square or a cube underneath it.

For part one of the investigation I will investigate how many different arrangements of five cubes there are on a six square grid.

I am going to draw all the combinations for the specifications above to find out how many combinations there are.

Now I will choose a number of layers to do, I have chosen to use a grid size of four with two layers because I have already have the number of combinations (12), which is my target answer, and in the table above I have the answers with which to check my answer.

I know that I have to devide 4!  by something because we are treating each number in 4! as a new layer, and because the 4! Is greater than 12 I know that there are too many layers involved. The only direct way to get rid of any numerator is to devide by the same number, so if I want the first two layers (4x3) I must devide by the remaining layers (2x1).

Now I shall do the same with three layers, the number of combinations for three layers on a four grid is 24, 24 is my target answer.

Now I shall do the same with one layer, the number of combinations for one layer on a four grid is 4, 4 is my target answer.

I will now put this information in to a grid.

My table shows me that, if you think of each number in the denominator column as a layer;

n) is mentioned in this part of the formula, it must be subtracted by the number of gaps on the bottom layer (o). So the formula now reads:

I have to multiply these two parts of the formula together because one half caters for what effect the number of gaps has on the bottom layer and the half above caters for the problem of any sized grid and any number of layers.

. So the formula for part three will be:

It is this answer because:

My formula for the combinations of a four square grid with two layers of cubes and two gaps on the bottom row gives me the same answer as my results, which means that my formula for part three is correct.