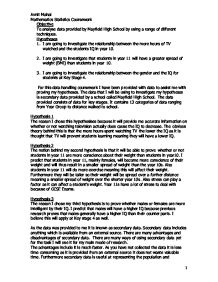 To analyse data provided by Mayfield High School by using a range of different techniques.

For this data handling coursework I have been provided with data to assist me with proving my hypotheses. The data that I will be using to investigate my hypotheses is secondary data provided by a school called Mayfield High School. The data provided consists of data for key stages. It contains 13 categories of data ranging from Year Group to distance walked to school.

The reason I chose this hypothesises because it will provide me accurate information on whether or not watching television actually does cause the IQ to decrease. The obvious theory behind this is that the more hours spent watching TV the lower the IQ as it is thought that TV will prevent students learning meaning they will have a lower IQ.

Stem and Leaf Diagram of IQ of the above Students

Overall it is possible to say that this diagram does not agree with my hypothesis and that the average amount of hours TW watched is the most promising for a students IQ.

From the analysis of the data for my first hypothesis it is possible to say that my hypothesis was correct to a certain extent.

To investigate my second hypothesis I have decided to use a scatter graph to try and discover if the year 10s or year 11s have a greater spread of weight. The scatter diagram here will show the spread of year 10 and 11 students BMI upon a scatter graph.

The graph shows that there is a very large spread of students BMI across the scatter diagram. 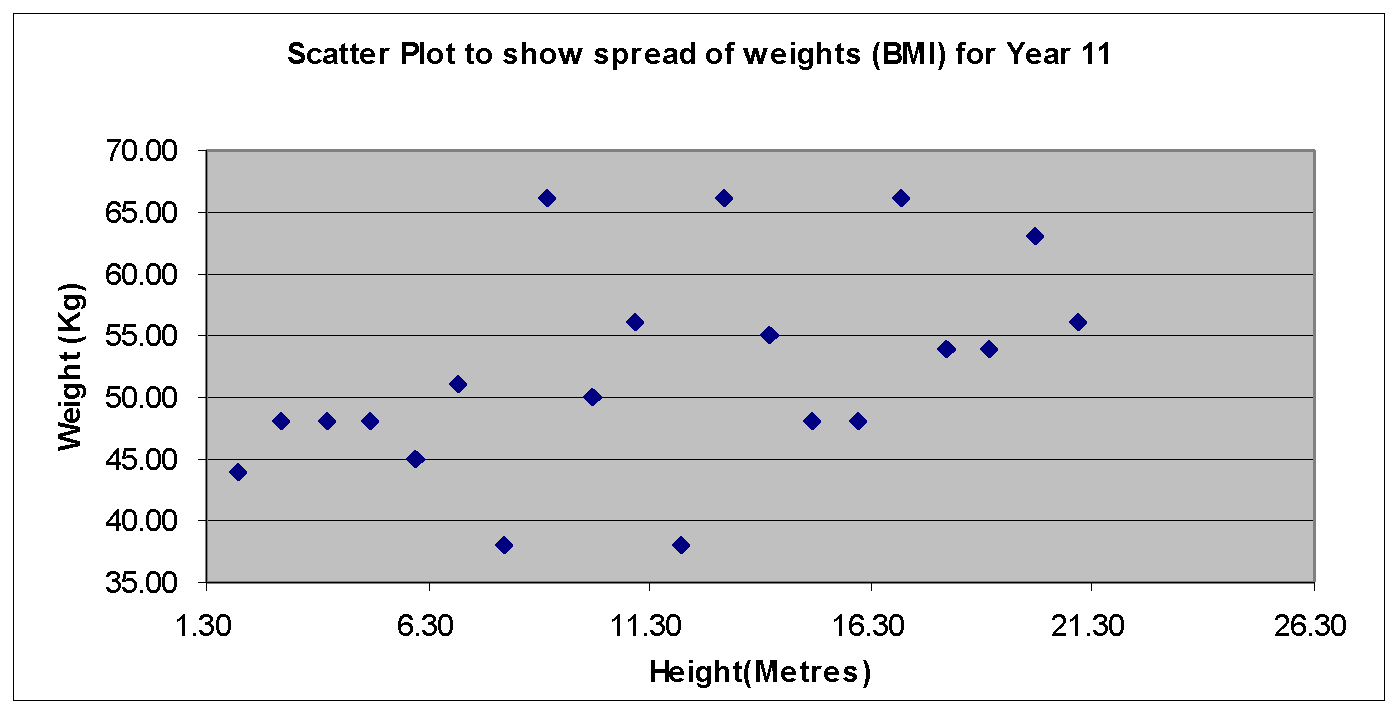 From this graph it is possible to say that there is not as larger spread compared to the year 10s.

Also I worked out the product moment coefficient of the two graphs.

Secondly I calculated the average BMI of the two year groups. To calculate BMI (Body Mass Index) the formula is weight / Height ^2.

AVERAGE BMI FOR BOTH YEARS

Another calculation includes the range of both of the years BMI. To calculate this I must work out the maximum and minimum BMI for both year groups and then takeaway the minimum from the maximum to give me the range.

The maximum AND minimum BMI for the year 10s was

The maximum AND minimum BMI for the year 11s was

I believe that it is not possible to confer that the data was not biased because we are unsure of the collection techniques so we are not 100% of how the data was collected and if it was collected in a biased way or not. However we can be sure that bias did not arise by the people asked because the whole school was asked the same questions so bias could not have arisen by the people asked.

Overall for improvement to the investigation, I would have not used systematic sampling for one of my hypotheses.

To investigate the problem further, I believe that I could have collected data from my own school and process the data and analyse whether or not the data agrees or disagrees with my hypotheses. My collection techniques would have been unbiased and I would use the same techniques used in this investigation so that I could compare the overall results of Mayfield School to Sir William Borlase Grammar School. This would have provided interesting data to analyse and would have provided me with more data to prove my hypotheses correct or incorrect.