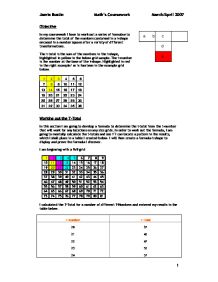 In my coursework I have to work out a series of formulae to determine the total of the numbers contained in a t-shape encased in a number square after a variety of different transformations.

The t-total is the sum of the numbers in the t-shape, highlighted in yellow in the below grid sample. The t-number is the number at the base of the t-shape.Highlighted in red in the right example/ or is fourteen in the example grid below.

In this section I am going to develop a formula to determine the t-total from the t-number that will work for any locations on any size grids. In order to work out the formula, I am going to mentally calculate the t-totals and see if I can locate a pattern in the results, which I shall place in a table I created below. I will then create a formula-t-shape to display and prove the formula I discover.

I am beginning with a 9x9 grid 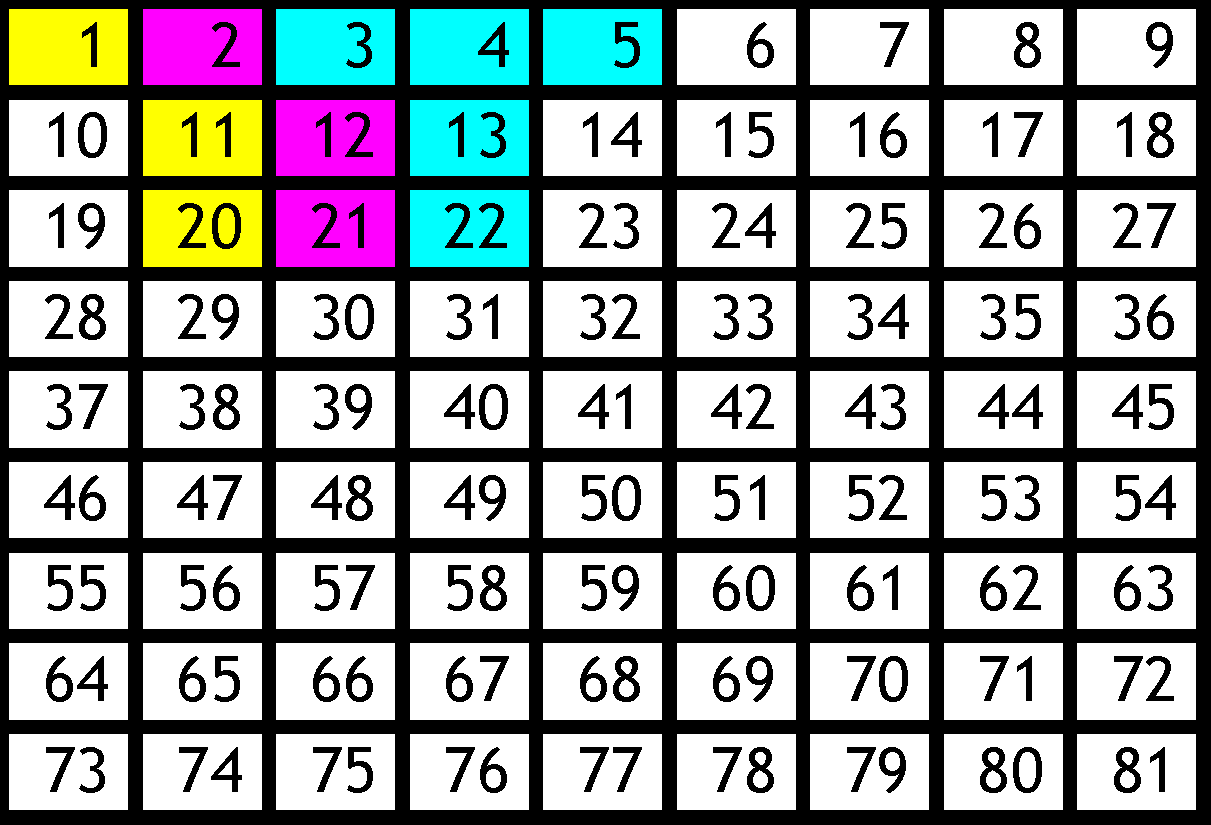 I calculated the T-Total for a number of different T-Numbers and entered my results in the table below.

I noticed that each time the T-Number increased by 1 there was an increase of 5 in the T-Total. I thought therefore that the formula would have 5n in it.

From examining how the results were affected by the vectors, I was able to determine that every positive ‘a’ you move it, it adds on ‘a’ to every part of the ‘t’, like pictured in red in the table below. Also, every positive ‘b’ it was moved, it added ‘–gb’ to each square, like pictured in blue below. After adding up these new additions to my t-formula-square, I developed the formula ‘n+a-gb’ for finding the t-number.

The limitations of translation were few but there is one very large one. The highest number ‘a’ or ‘b’ could be was (g-3) this was because the t shape was unable to go out of the grid and the formula I developed came from the fact the t-shape was three squares across and three downwards.

I beginning by drawing the t-shapes I am going to use and then rotating them by 90 degrees in a clockwise direction. I have also realized that a 90 degree clockwise rotation is the exact same as a 270 degree anti-clockwise rotation. My centre of rotation to begin with will be the t-number. I’ll begin on a 7x7 grid.

I noticed the 5n would be there again, similarly to earlier. So I just worked out the rest using simple mathematics.

So therefore the formula is 5n+7 for a 7x7 grid, I saw again a correlation between the added amount and the grid width. I guessed that a formula of 5n+g would work. I’m now going to prove it.

I now have to find a formula for any size grid and a 90 degree clockwise/270 degree anti-clockwise rotation. I investigated the correlation between the +7 part of the formula and the grid width; I tested this theory and proved it using this t-formula-shape (in yellow).

From this I developed the formula of 5n+7g for the rotation of a t-shape by 180 degrees.

I now have to create a formula for rotation by 270 degrees around the t-number. To accommodate the rotation I had to translate my t-shape (1/0) on my grid.

I developed the formula of 5n-7. I noticed this was the opposite of my 90 degree rotation. I also noticed that each of the formulas for the different rotations contained seven. This furthered my suspicions that 7 was in fact ‘g’ but further testing disproved that theory.

I noticed that a rotation of 180 degrees from all points of view resulted in the positive being changed into a negative or vice-versa. This can relate to the vectors explained earlier, where the squares translating left result in a negative outcome as well as the squares travelling down.

In conclusion, during the project I discovered a series of formula so I was able to determine the values of t-shapes in any size grids, after various transformations. I found the project steadily became harder as it developed. The formulae were harder to piece together as the transformations changed. In the end I was unable to discover a formula for rotation from a point outside of the t-shape.

I did enjoy the coursework and found it adequately challenging but not so difficult that I was unable to complete it.