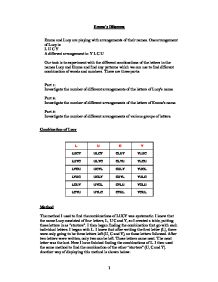 Emma and Lucy are playing with arrangements of their names. One arrangement of Lucy is:

A different arrangement is: Y L C U

Investigate the number of different arrangements of the letters of Lucy's name.

Investigate the number of different arrangements of the letters of Emma's name.

Investigate the number of different arrangements of various groups of letters.

The method I used to find the combinations of LUCY was systematic. I knew that the name Lucy consisted of four letters, L, U C and Y, so I created a table, putting these letters in as ‘’starters’’. I then began finding the combination that go with each individual letters. I began with L. I knew that after writing the first letter (L), there were only going to be three letters left (U, C and Y), so these letters followed. After two letters were written, only two can be left. These letters came next. The next letter was the last. Now I have finished finding the combinations of L. I then used the same method to find the combination of the other ‘‘starters’’ (U, C and Y). Another way of displaying this method is shown below:

By using this method, I know that I have discovered all combinations of the word Lucy.

There are two M’s in the name Emma, but as we are treating them as two separate letters, we can see that there are many duplicates in this table. Currently there are 24 combinations, the same as Lucy, but now we will eliminate the duplicates, leaving us with all the real combinations of Emma:

Now that we have crossed out the duplicates we can create a new table:

We can now see that there are actually 12 combinations in EMMA.

Using this methodical method is ok for words such as Lucy and Emma, but in another case such as a six-letter word, it would take very long and be extremely inconvenient. Therefore, a method must be found to make this process quicker and easier.

I am going to do this by experimenting with combinations of different amounts of letters, and see if any pattern emerges. I will use 1, 2, 3 and 4 letters, and put the results in a table.

All letters in brackets can be rearranged

The same method is required her, except now there is another letter (D). But we still follow the same procedures. There are four starting letters (A,B,C and D), and three letters which go with them. And from our last case we already know that with three letters, there are 6 combinations (3x2x1). So now, we just multiply this by 4

Letters in brackets can be rearranged

I have created a table showing my results:

Now we will put something in front of this, and see if anything changes:

I used the same systematic method as I did for all the other cases as I did for this, but when I had finished it, I saw something quite interesting. Because there is only one different letter in this (B), all that is really happening is the B is moving along the letters (highlighted in BLUE).

I will now look at a case where two letters are after of the repeated letters:

We will now move on to looking at one letter bring repeated five times:

My results are shown in the table below: