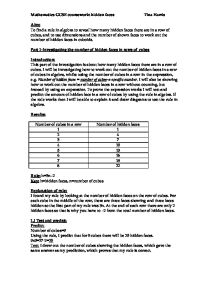 Number of cubes in cuboid=12

Using the rule, I predict that for a 12 cubed cuboid there will be 46 hidden faces.

S= (W x L) + 2(H x W) + 2(L x H). When you use both these rules in one expression, you can work out the number hidden faces in a cuboid with out counting, but instead by using the dimensions of the cuboid.

For example, by using the final rule I was able to work out the number of hidden faces of a 30-cubed cuboid, (length=2, width=5, height=3) without counting, but by using dimensions:

Using the final rule and the dimensions of the cuboid, I predict that there will be 46 hidden faces:

Test: I drew out the 24-cubed cuboid with the length=2, width=4, height=3. I counted the total number of faces, (144) within the cuboid, and then I counted the number of shown faces on the cuboid, (98); the numbers were the same as my prediction. I then did the calculation to work out the hidden faces (144-98) according to the faces I had counted on the cuboid. The answer was 46 hidden faces; this was the same as my prediction. This proves that my final rule works and that you can work out the total number of faces and showing faces by using dimensions and not counting.