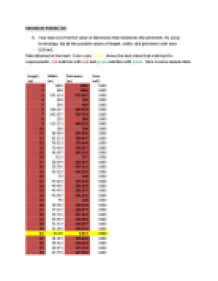 Data attached at the back. Color code: Yellow shows the best value that matches the requirements, red matches with red and green matches with green.  Here is some sample data:

For the formula of this question, I have used the standard equation for the perimeter of the rectangle.

To get the equation in two variables, we will have to convert one of the variables in terms of another variable. To do this, I used the area formula:

As the area is kept constant at 1000 in the investigation, the formula can be made into,

From this we can transfer the variable length to isolate width, thus getting a new equation.

Substituting this in the original perimeter equation,

To prove my formula right, I will make use of two examples.

The perimeter will be:

The perimeter will be:

As seen above, my formula functions perfectly.

As seen above, the minimum perimeter is achieved when the dimensions are 7m by 7.143m with a perimeter of 28.286m while maintaining an area of 50m2. Proving with the formula:

Anna has 40 m of fencing. She wishes to form a rectangular enclosure in which she will keep chickens. To help maximize the area she can enclose, she uses an existing fence. The 40 m of fencing forms the other three sides of the rectangle. Your task is to determine the rectangular shape, which encloses the maximum area of ground.

The data is attached at the back. Color coding: Yellow is width, blue is area.

The data that satisfies the solution is most area which is 200m2 with the length=20 and breadth=10.

As this formula is about area, we will use the area formula:

Substituting to the area equation,

(Where x is equal to the width or breadth)

To prove my formula, I will use 2 examples:

So, we can see above the formulas function properly.

The graph of this equation is quadratic as visible from the equation and the data. And the data increases first, and then decreases, it displays a parabolic behavior. The equations too are in the power of 2, making it a quadratic curve or parabola. To prove this, here is the graph: 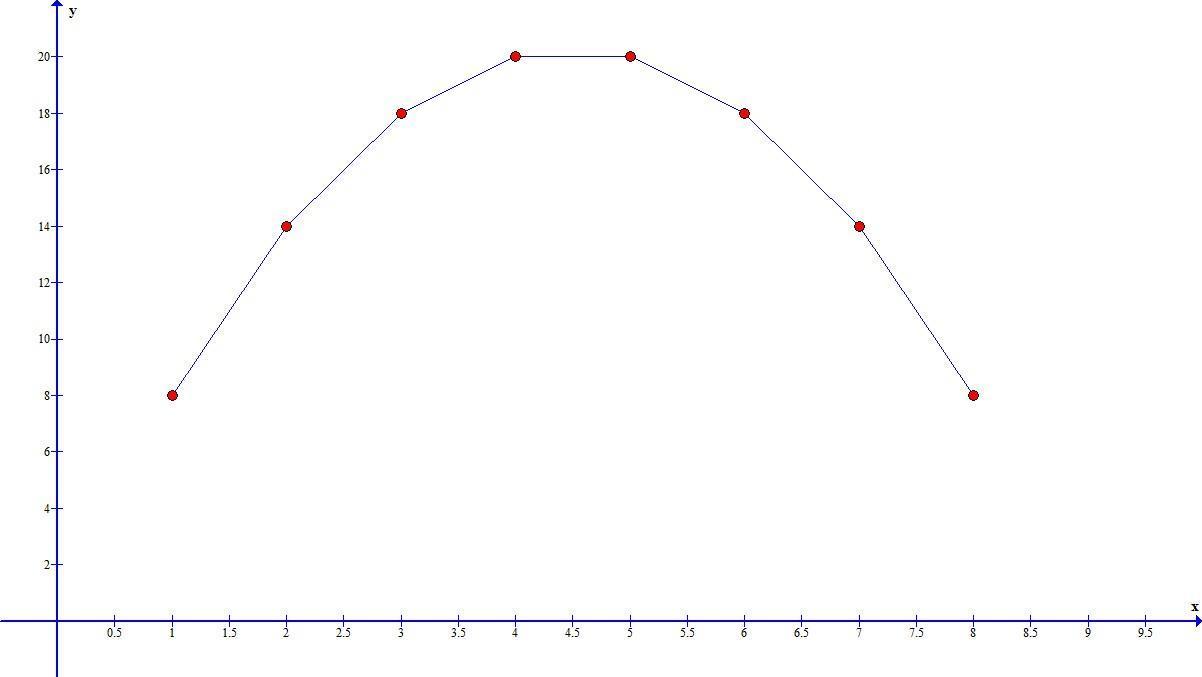 This graph is a quadratic graph also known as a parabola. This graph is an upward parabola because the co-efficient of x2 is negative. At the beginning of the graph from 1 to 10, the graph is increasing and later on from 10 to 20 it is decreasing. This shows that this is a quadratic equation which is also visible from the equation and graph.  As there is no y-intercept in the graph, the value of c is 0. In this case we also observe that the area is the highest when the dimensions are close to that of a square.

I have used one decimal place in my data for length and width and two for my area. This makes my result and my method quite accurate as there is a high degree of accuracy. I did this so that there is no repetition of any data, as said earlier, the data was quite close, so using a accuracy of 1 decimal place would give me repeated data, and thus cause a negative impact on the graph too. As I have made use of technology to calculate my results, they are even more accurate as there is very less room for error.  I have also done this for very accurate data which is better than the ones with lower decimal places, while giving me the same graph as any higher decimal places.

But as tables cannot be in decimals,

Example 1: A child is building a model of a house. She has a limited perimeter of the base Styrofoam of 8m. Help her choose the dimensions of the Styrofoam to maximize the area.

The maximum area is achieved when the Styrofoam is with the dimensions 2m by 2m with the area of 4m2. Checking with the formula:

Example 2: A company has to build a swimming pool in an apartment. They have a limited amount of concrete to build enough wall to cover 100m. Formulate a dimension that will help maximize the amount of area they can cover, so that a larger pool can be built.

As seen above, the dimensions that maximize the area are 25m by 25m giving an area of 625m2. We c

A box must have base x cm by 2x cm. What are the dimensions of the box of maximum volume if its length + width + depth ≤ 140 cm?

Using the basic dimensions as 28cm by 22cm:

Example 1: Packaging companies require maximizing their volume in order to decrease packaging cost and put more food in the box. Suggest the dimensions of the box with the most volume for a plastic sheet 20cm by 15cm.