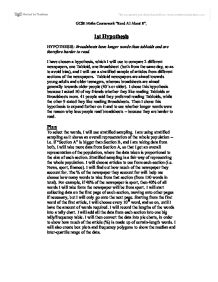 Read All About It

GCSE Maths Coursework “Read All About It”,

HYPOTHESIS: Broadsheets have longer words than tabloids and are therefore harder to read.

I have chosen a hypothesis, which I will use to compare 2 different newspapers, one Tabloid, one Broadsheet (both from the same day, so as to avoid bias), and I will use a stratified sample of articles from different sections of the newspapers.  Tabloid newspapers are aimed towards young adults and older teenagers, whereas broadsheets are aimed generally towards older people (40’s or older). I chose this hypothesis because I asked 50 of my friends whether they like reading Tabloids or Broadsheets more. 41 people said they preferred reading Tabloids, while the other 9 stated they like reading Broadsheets. Then I chose this hypothesis to expand further on it and to see whether longer words were the reason why less people read broadsheets – because they are harder to read.

To select the words, I will use stratified sampling. I am using stratified sampling as it shows an overall representation of the whole population – i.e. if “Section A” is bigger than Section B, and I am taking data from both, I will take more data from Section A, so that I get an overall representation of the population, where the data taken is proportional to the size of each section. Stratified sampling is a fair way of representing the whole population. I will choose articles to use from each section (i.e. News, sport, finance). I will find out how much of the newspaper they account for. The % of the newspaper they account for will help me choose how many words to take from that section (from 150 words in total). For example, if 40% of the newspaper is sport, then 40% of all words I will take form the newspaper will be from sport. 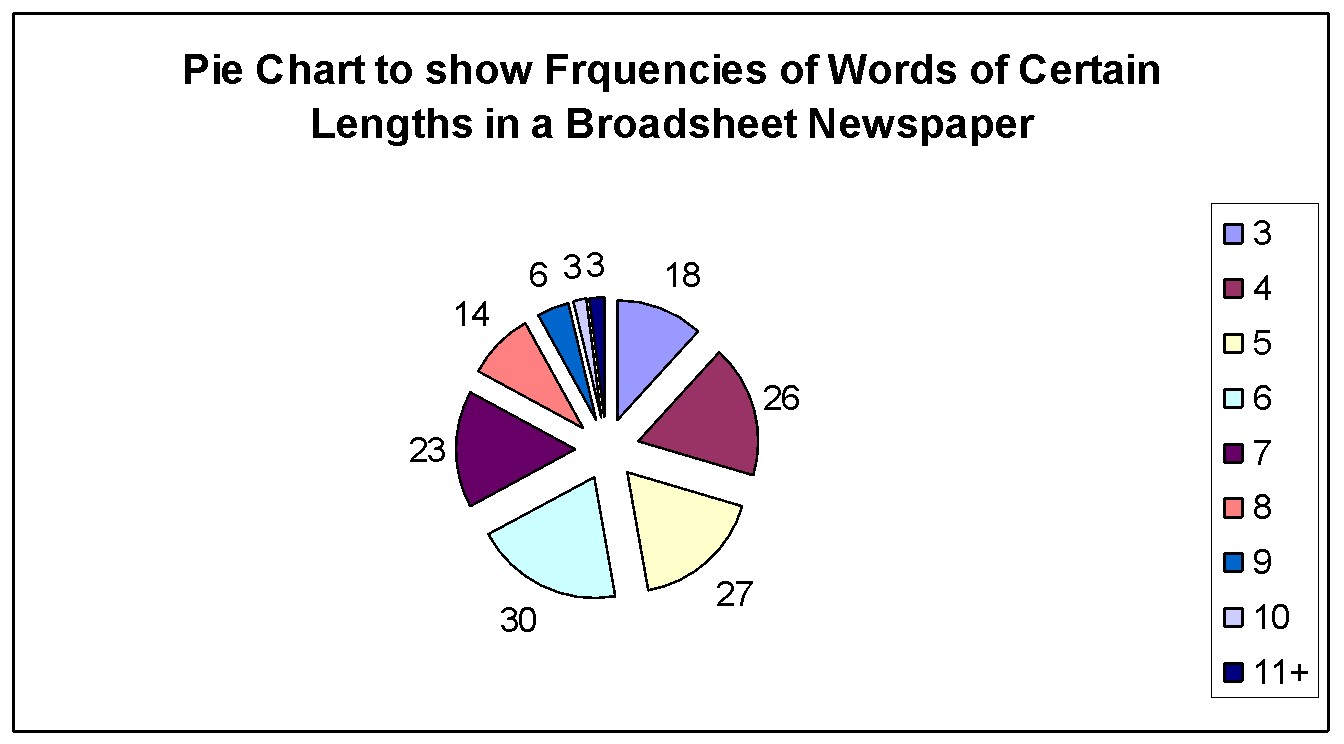 The Broadsheet had a higher mode than Tabloid, which shows that the most used size of word is bigger in the Broadsheet (6) than the Tabloid (4). This supports my hypothesis that Broadsheets have longer words.

However, the mean is higher in the Tabloid than the Broadsheet. This could be because of the fact that the mode of the Tabloid (4 letters)

In conclusion, I found that my hypotheses were correct. Broadsheet had a higher median than Tabloid, and also had a higher mean. This means that Broadsheets must have a higher percentage area of text (in general) for the median and mean to be higher than Tabloid. Although a lot of factors such as text size, and also the font used (different fonts have different sizes and styles) come into practice regarding the overall area of the text, it is up to the newspaper editors to decide how much of the newspaper is text, how much is pictures, and how much advertising they show/offer. This data varies from paper to paper, and also the size of the business that runs the newspaper may affect the size of the layout: A small newspaper may need to give a lot of advertising space so that they can survive, and can only afford to print text, whereas a top-selling tabloid could offer a lot of pictures as they would have the money to print them in colour, and in black and white.

Overall Conclusion
In conclusion, I found that both my hypotheses were correct – and that they linked with each other. Newspapers (i.e. Broadsheets) with longer words would have to take up more area as text because otherwise their articles would be very short and possible would lose interest quickly. Tabloids, I have found, like to use shorter words, and they also use less text, as pictures, which they use a lot of, are likely to attract people in their target audience – young adults. Broadsheets however, with longer words and more text, may appeal to the older audience more.