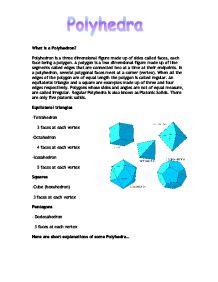 What is a Polyhedron?

Polyhedron is a three dimensional figure made up of sides called faces, each face being a polygon. A polygon is a two dimensional figure made up of line segments called edges that are connected two at a time at their endpoints. In a polyhedron, several polygonal faces meet at a corner (vertex). When all the edges of the polygon are of equal length the polygon is called regular. An equilateral triangle and a square are examples made up of three and four edges respectively. Polygons whose sides and angles are not of equal measure, are called irregular. Regular Polyhedra is also known as Platonic Solids.

This is the simplest of all the polyhedra. It uses the least number of faces to enclose any three-dimensional space.  The polygon that makes up these faces is also the simplest polygon. Tetrahedron has 4 vertices, 6 edges and 4 faces.

Hexahedron is the most common polyhedron. A hexahedron is a polyhedron with six faces. It is often called cube. The thing about the cube (hexahedron) is that all the other regular polyhedra can be derived from taking cuts across the cube to form a tetrahedron first, and accross the tetrahedron to give an octahedron, and so on.It has 8 vertices, 12 edges, and 6 faces.

Octahedron is made from placing two square based pyramids base to base. It has eight faces – Octa.

However, it is different. In this model all the surfaces of the faces are flat, unlike the spherical surface of a soccer ball. It has 32 faces, 90 edges and 60 vertices. 12 faces are pentagons that are replacing the twelve original vertices of the icosahedron. The other twenty faces are hexagonal.

A polygon is said to be regular if it has equal sides and equal angles.

A polyhedron is said to be regularif its faces are regular polygons and its corners are regular solid angles. Also equal faces and equal angles.