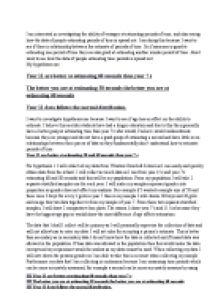 Statistical Experiment Plan to investigate the ability to estimate 30 and 60 seconds.

I want to investigate hypothesis one because I want to see if age has an effect on the ability to estimate. I believe this as elder students have had a longer education and due to this they generally have a better grasp at estimating time than year 7's who would, I believe would underestimate because they are younger and do not have a good grasp of estimating a second and have little or no relationships between their pieces of data as they fundamentally don’t understand how to estimate periods of time.

For hypothesis 1 I will collect all my data from Winston Churchill School as I can easily and quickly obtain data from the school. I will collect as much data as I can from year 11's and year 7's estimating 60 and 30 seconds and this will be my population. From my population I will take 2 separate stratified samples one for each year.

I am interested in investigating this hypothesis because I believe that people who estimate two periods of time different from each other i.e. 30 and 60 seconds will have correlation so if one is bad at estimating 30 seconds then they there estimate for 60 seconds will also be bad.