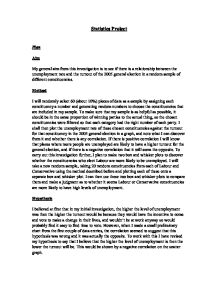 My general aim from this investigation is to see if there is a relationship between the unemployment rate and the turnout of the 2005 general election in a random sample of different constituencies.

I will randomly select 60 (about 10%) pieces of data as a sample by assigning each constituency a number and generating random numbers to choose the constituencies that are included in my sample. To make sure that my sample is as helpful as possible, it should be in the same proportion of winning parties to the actual thing, so the chosen constituencies were filtered so that each category had the right number of each party. I shall then plot the unemployment rate of these chosen constituencies against the turnout for that constituency in the 2005 general election in a graph, and note what I can discover from it and whether there is any correlation. If there is positive correlation I will know that places where more people are unemployed are likely to have a higher turnout for the general election, and if there is a negative correlation that it will seem the opposite. To carry out this investigation further, I plan to make two box and whisker plots to discover whether the constituencies who elect Labour are more likely to be unemployed.

Using Microsoft Excel I added in a trendline, which although it is not striking, seems to show a negative correlation which would mean that the higher the unemployment rate is, the less likely people are to turn up to the general election. This supports my hypothesis quite well, although there are some anomalies. The anomaly that is particularly striking is Newry and Armagh, who although they have a 4.6% unemployment rate, they managed a very high turnout of 76.3%, possibly meaning that either there is a mistake in the records, or more likely that this is just an exception that did happen for any number of reasons. If it is a small constituency then it would probably be easier for a higher turnout even if they are unemployed, so that may be the reason. Due to this, I do not plan to remove this point as I think that it is correct data and should not be overlooked. Other than this however, apart from a few straying from the line, most of the points fit with the hypothesis and it works out quite well to how I had imagined.

My results from my further investigation worked out like this:

In the future it would be possible to do further investigations leading on from these ones which could make even more judgments on the factors that assess turnout and result of elections. These investigations could be repeated, but instead of using unemployment as a scale, house ownership could be used instead to see if you are more likely to turn up to an election if you own your own house, and also whether areas with large percentages of homeowners are more likely to vote for Labour or Conservative. If further data could be found, investigations could be made into whether people of certain ages or backgrounds are more or less likely to turn up to elections.

All of this information could probably at some point be useful to someone. If the government wanted to increase turnout to elections, from this evidence they can see that if they appeal more to the unemployed, they may get a higher turnout. Also, parties could see which sort of groups are voting for them the most, and find a way to gain wider support without losing that which they already have.