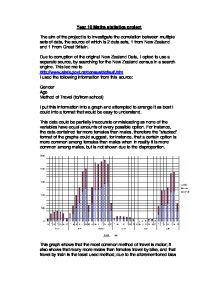 Due to corruption of the original New Zealand Data, I opted to use a separate source, by searching for the New Zealand census in a search engine. This led me to

I used the following information from this source:

I put this information into a graph and attempted to arrange it as best I could into a format that would be easy to understand.

This data could be partially inaccurate or misleading as none of the variables have equal amounts of every possible option. For instance, the data contained far more females than males, therefore the “stacked” format of the graphs could suggest, for instance, that a certain option is more common among females than males when in reality it is more common among males, but is not shown due to the disproportion. 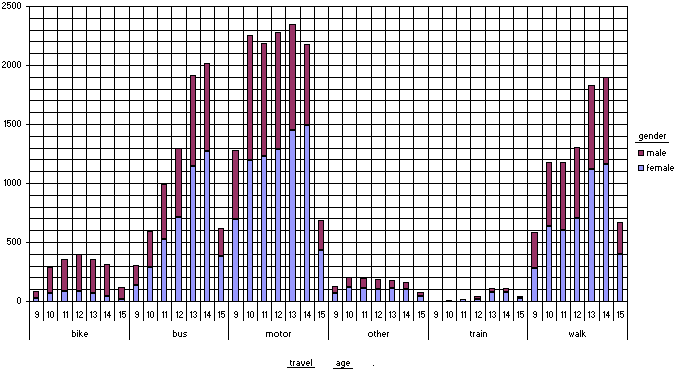 This graph shows that the most common method of travel is motor; it also shows that many more males than females travel by bike, and that travel by train

After these calculations have been applied to the data, it may be left with an unclear trend. In order to be able to make a fair conclusion on the data, trendlines will need to be added. This can be done via Microsoft excel 2007, which has a feature to add several different types of mathematical trendlines. 3 Types of line in particular are particularly effecient at dealing with this type of data;

Exponential trendlines are lines that use the fewest “squares” possible in order to fit through the equation y=cebx, where c and b are constants, and e is the base of the natural logarithm.

I can conclude that, despite my first hypothesis, females aged 9-15 overall are more likely to walk to school, or use an “other” method of transport (other than car, train, bus, etc), than males aged 9-15. Also, I proved my second hypothesis correct, as females aged 9-15 also happened to be more likely to travel by train than males of the same age group. Finally, I discovered that travel by motor and “other” were both generally more commonplace among younger ages (from the 9-15 range) and that travel by bike is most often made use of by children of ages 10-12, followed by ages 13-15, and finally age 9, showing that it is more common among older children overall, although this would be reversed if children aged 9 were not taken into account.

Microsoft Excel proved to be extremely useful to this project, especially with its very easy-to-use graph maker and trend line tool.

I managed to prove or disprove every hypothesis I put forward, resulting in 1 correct hypothesis, 1 incorrect hypothesis, and 1 hypothesis that had a combination of correct and incorrect ideas. Although many parts of the project were very difficult and somewhat confusing, I am moderately pleased with the results. If I were to do the project again, I would have used the newest version of Microsoft Excel for the entire project, as it is far more efficient than MS Excel XP.