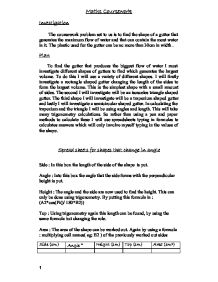 The coursework problem set to us is to find the shape of a gutter that generates the maximum flow of water and that can contain the most water in it. The plastic used for the gutter can be no more than 30cm in width.

The coursework problem set to us is to find the shape of a gutter that generates the maximum flow of water and that can contain the most water in it. The plastic used for the gutter can be no more than 30cm in width.

To find the gutter that produces the biggest flow of water I must investigate different shapes of gutters to find which generates the largest volume. To do this I will use a variety of different shapes. I will firstly investigate a rectangle shaped gutter changing the length of the sides to form the largest volume. This is the simplest shape with a small amount of sides. The second I will investigate will be an isosceles triangle shaped gutter. The third shape I will investigate will be a trapezium shaped gutter and lastly I will investigate a semicircular shaped gutter. In calculating the trapezium and the triangle I will be using angles and length. This will take many trigonometry calculations. So rather than using a pen and paper methods to calculate these I will use spreadsheets typing in formulas to calculates answers which will only involve myself typing in the values of the shape.

Spread sheets for shapes that change in angle

Side : In this box the length of the side of the shape is put.

Angle : Into this box the angle that the side forms with the perpendicular height is put.

So the triangle and the rectangle doubled formed the same shape but were divided in different ways.

As before doing every calculation would take to long so firstly I will change the angle 10° at a  time then when I have narrowed it down to less points I will change the angle 1° at a time so I can find the maximum area. When working out the area I need to consider the fact that there are 3 shapes 2 triangles and a rectangle.  I will work out the area for each shape then add it together and because the trapezium is symmetrical I only need to work out the area of 1 triangle then times it by 2.

The circle can be described, as having 1 side, in a true circle this is the case. A shape that has an unimaginable number of sides has the appearance of a circle but it is not. A circle must have a curved side. The polygon with sides can have millions of sides but the semi circle has the largest area as it has only 1 side. So from the start you could predict the semicircle to hold the most water as it has a curve and a curve will always create a larger area than a many sided shape even if it appears to look like a curve.