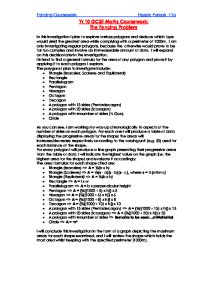 In this investigation I plan to explore various polygons and deduce which type would yield the greatest area while complying with a perimeter of 1000m. I am only investigating regular polygons, because the otherwise would prove to be far too complex and involve an immeasurable amount of data. I will expand on this decision later in the investigation.

I intend to find a general formula for the area of any polygon and prove it by applying it to each polygon I explore.

The polygons I plan to investigate include:

As you can see, I am working my way up chronologically in aspects of the number of sides on each polygon. For each one I will produce a table of data displaying the progressive areas for the shape; the areas will increase/decrease respectively according to the varying unit (e.g. 50) used for each instance of the shape.

For every polygon I will produce a line graph presenting their progressive areas from the table of data. I will indicate the highest value on the graph (i.e. the highest area for the shape) and evaluate it accordingly.

The area formulas for each shape cited are;

Naturally, the perimeter must always equal 1000, and the measurements of the triangles have all met this criterion. As we can see, the highest value shown is 47925.72, before the area begins to decline to 44721.36. We can evaluate that an isosceles triangle with base = 350m, both sloping sides = 325m each accommodates the highest area whilst adhering to the set perimeter of 1000m.

One other thing we notice in the table is the last result which has an area of zero, although the perimeter is intact. This is an anomaly due to the fact that this triangle is physically impossible to draw; the sloping sides are too short to meet each other as the base is not shorter than both their lengths combined. i.e.

Nevertheless, I have noticed that the difference between the highest value and the values either side of it is quite large. Therefore, I can further develop this analysis by producing another set of data, this time increasing the base values by a much smaller-scale number such as 10.

On the following pages, you will see the drawings and written method used to find the areas – I have implemented Pythagoras’ Theorem to find out the height of each triangle, and have substituted the gathered information into the formula accordingly. A graph which corresponds to the areas that I have just examined will also be shown following the drawings; the page which

succeeds that will continue my investigation. 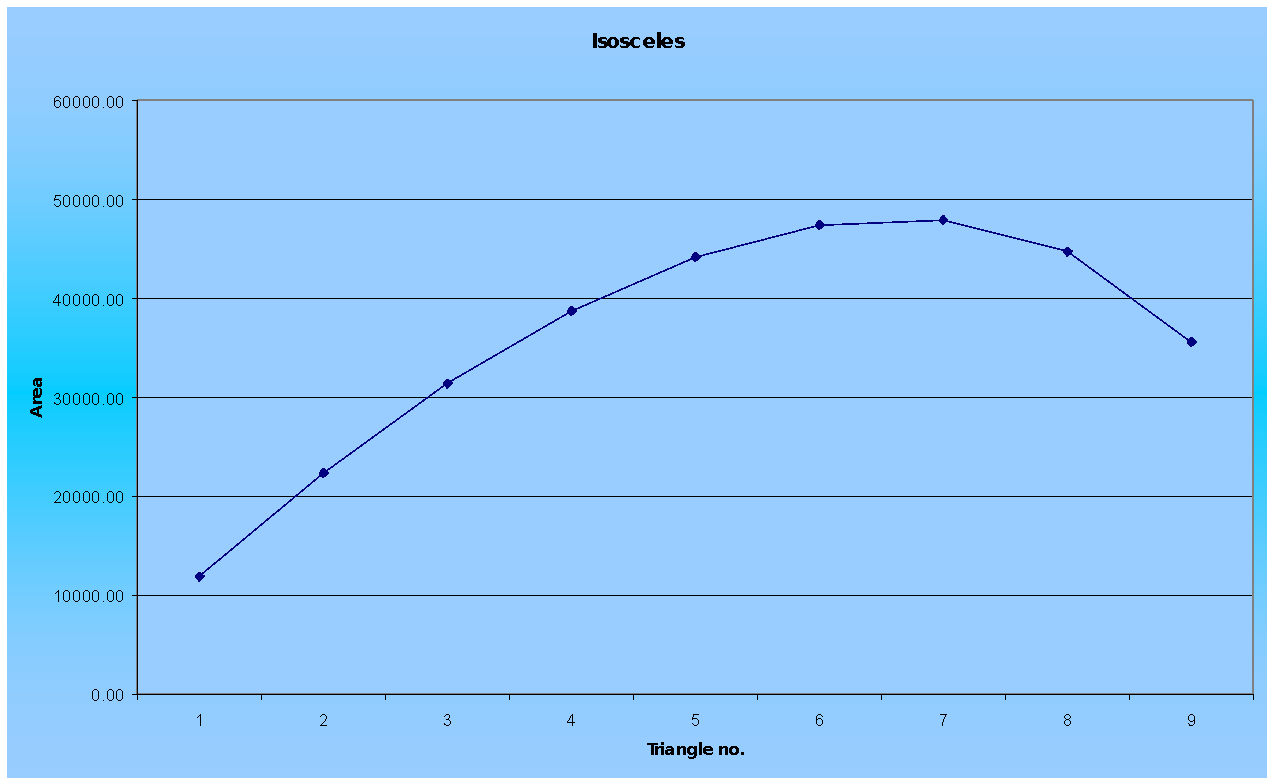 ^ The graph has a smooth curve,; however, unlike the scalene triangles, the isosceles triangles results aren’t “symmetrical”; they ascend to a point, and then decline with greater magnitude. The explanation for this is because the sum of the two sloping sides must be greater than that of the base. As the base values are increasing, the sloping lengths must increase in order to comply with this standard.

Using the same formulas, but only changing the base values in scale of 10, I have produced this table of data.

Evidently, we see that the data has revealed a higher value that the previous table. As there is still a gap around the largest triangle, I will produce another table of data, this time increasing the base values by an even smaller number; 2. Again, a graph depicting the areas will be displayed after the diagrams. 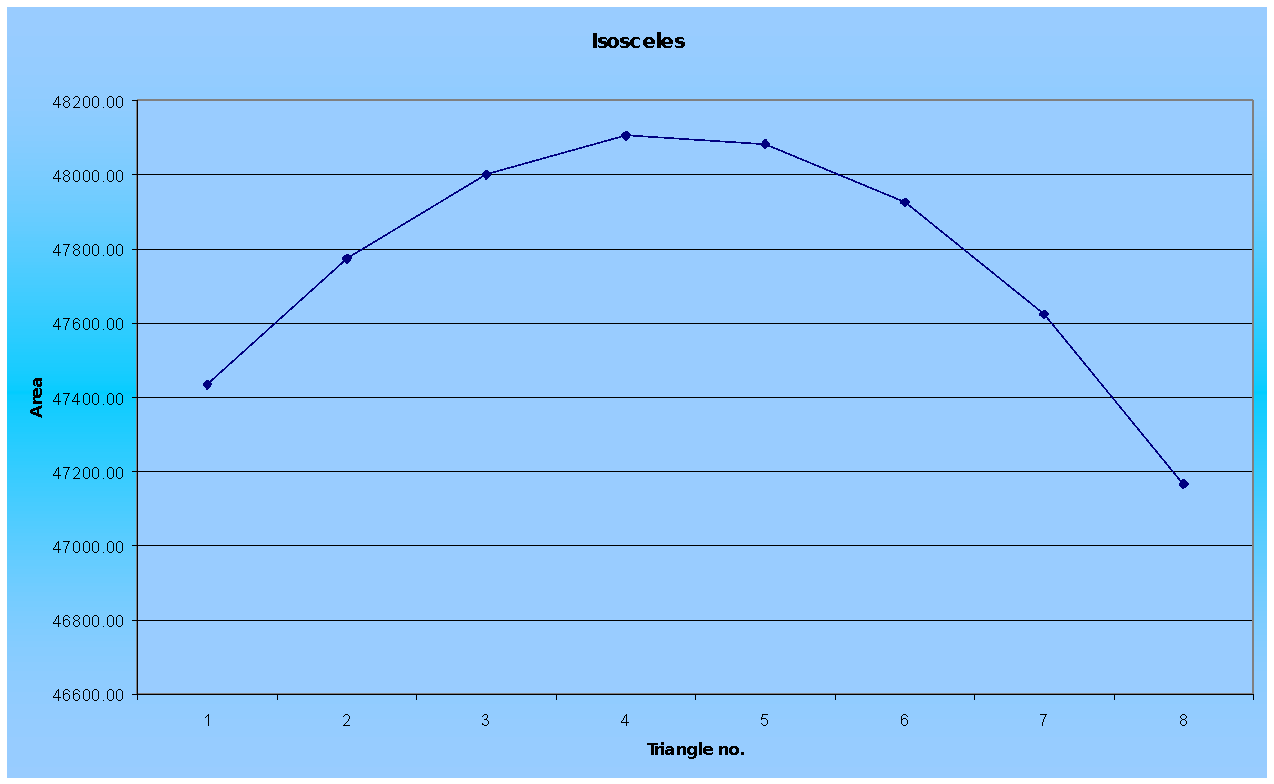 ^ The graph resembles an “n” to a much greater extent than before; though it still, obviously, remains “unsymmetrical”.

The highest value has changed yet again; and, to make no room for error next, I will create another table of data with the base values being increased by 0.5. A final graph will be shown after the diagrams. 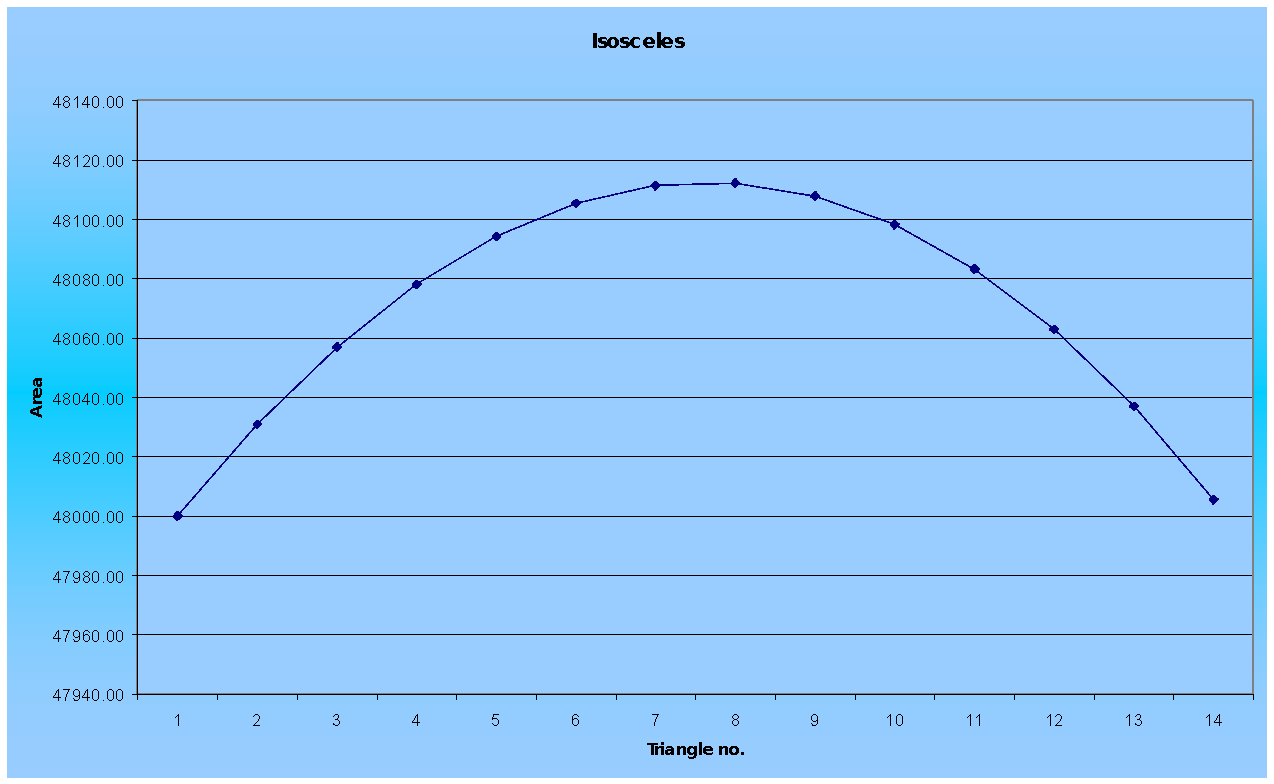 ^ We can see that the shape of the graph is very similar to an “n” shape now. We know that it cannot be symmetrical – you can notice that there is no exact middle point in the graph.  I have showed this on the graph by putting a line through the highest point (highest value).

Once again, the highest area has changed. 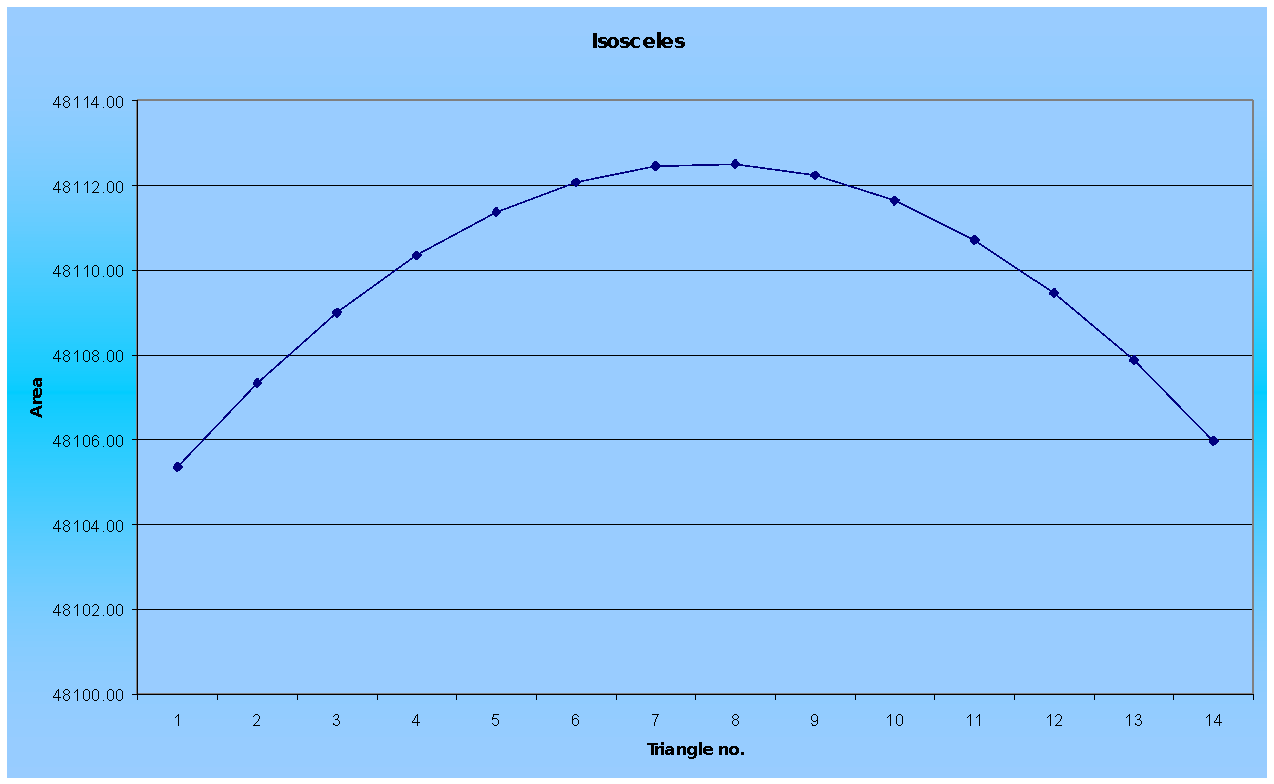 ^ Once more, we have discovered a higher area between the gaps. Judging by the measurements, I can predict that the largest area would be that of an equilateral triangle.

This proves that my prediction is correct.

Bearing in mind that the perimeter = 1000m, I have divided it by 3 to give us the one equilateral triangle.

Nevertheless, I can prove logically that neither triangle will hold the maximum potential area while abiding by the 1000m perimeter. This is because the shape of the triangle (regardless of whether it is isosceles, equilateral or even scalene) hinders it, as shown in various examples below. I indicate the “wasted space” which, if filled, not only gives us a bigger potential area, but tells us that quadrilaterals (specifically rectangles) have the ability to hold a higher maximum potential area (with the perimeter of 1000m).

Continuing on with my investigation, I will now examine the extent of which parallelograms will go to hold its maximum area, again, whilst abiding by the decided perimeter of 1000m. The following table I created in Excel show the areas of parallelograms, with each interior angle increased by 10.

Here is the table of data in formula view.

To find out length AC;

To find out the interior angle AÔC

To acquire the perpendicular height;

Now that I have found the general formula for one of the triangles in the polygon, all I must do is multiply the area of that triangle by the total number of triangles/sides the polygon has.

Now that I have verified that the formula works I am able to use it to find the formula of any regular polygon by substituting n with the number of sides the polygon has.

To conclude, I will summarise what I discovered during this investigation.

I found that as n (number of sides) increases, so does the area; this, in turn, led me to investigate the circle which, as I predicted, held the largest area whilst keeping to the set rule of the perimeter/circumference being 1000m.

I have also found out and showed in stages a general formula in which the area of any regular polygon can be found, just by substituting n for the number of sides the polygon has.

I have also shown a graph which shows clearly the maximum areas for each polygon, and this also reinforces the idea that as the number of sides increase, so does the maximum potential area.