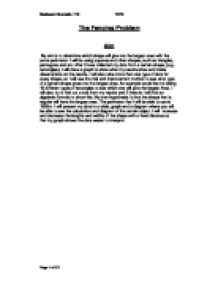 The Fencing Problem. My aim is to determine which shape will give me the largest area with the same perimeter. I will be using squares and other shapes, such as triangles, pentagons and etc.

My aim is to determine which shape will give me the largest area with the same perimeter. I will be using squares and other shapes, such as triangles, pentagons and etc. After I have collected my data from a certain shape, (e.g. rectangles), I will draw a graph to show what my results show and make observations on the results. I will also take more than one type of data for every shape, so I will use the trial and improvement method to see what type of a certain shape gives me the largest area. An example would be me taking 10 different types of rectangles to see which one will give the largest Area. I will also try to find out a rule from my results and if there is I will find an algebraic formula to show this. My own hypothesis is that the shape that is regular will have the largest area. The perimeter that I will be able to use is 1000m. I will present my data in a table, graph and a diagram where you will be able to see the calculation and diagram of the certain object.

In order for me to analysis these results I will have to remove the results I got for the scalene triangles as there is no real trend with the results. 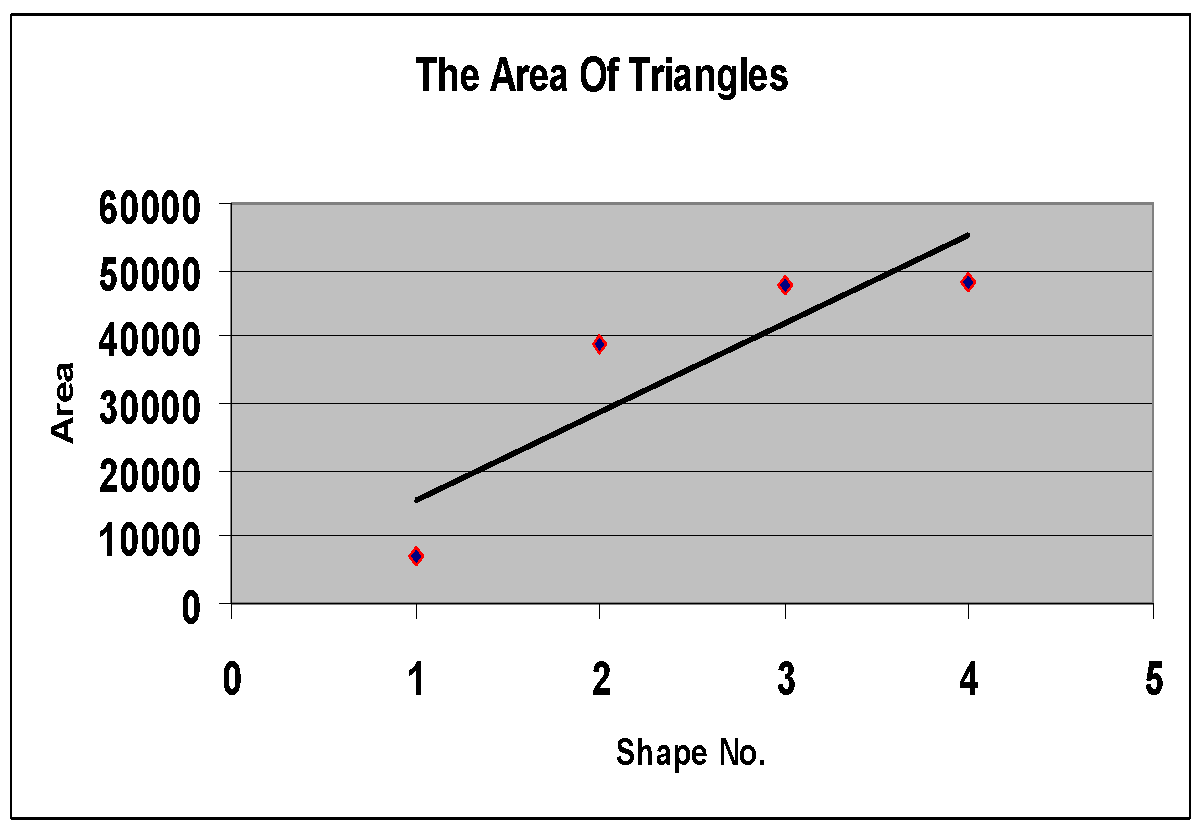 The line of best fit shows a strong positive correlation. On this graph I am not going to represent the data I retrieved from my scalene triangles, this is because that data would dramatically change my trend line, in a way that no observations would be possible to be made. From this graph I can say that as I decrease the gap between the base and hyp, the area increases. This is very similar to the squares and I have also realised that the shape that has the perimeter proportionately has the largest Area, while the shape with the furthest gap between it length + width, base + hyp, and has the lowest area. I made a statement, when I was analysing the rectangles, about how the gap in between decreases and how that makes the area increase, It is the same in this case. An example being shape 1, which has a difference of 350mbetween the hyp and the base and it, has an area of 7070m2. On the other hand shape 3, which is not an equal shape but still has a difference of 50 between the hyp and the base and has an area of 47430. My Graph also backs up this theorem. As I have said already the shapes, that have been evenly distributed through lengths and angles, give the largest area and this agrees with what I have just said about the gap between the sides and area, as the shape with the lowest gap between the sides is regular, and in both cases the equal shape has had the largest Area. So far my hypothesis has been proven to be true.

I have found out that the shapes that give me the largest area are regular and because of this finding I will only use regular shapes for the rest of this investigation. This is because I feel that my findings are reliable and it will save me time. This is not the only thing I am going to change; I will draw a graph comparing the highest results from all the shapes as I continue and see if there’s a link between the amount of sides and the area. So in my next section, pentagons, I will draw a graph comparing the area of the equilateral triangle, square and the regular pentagon. 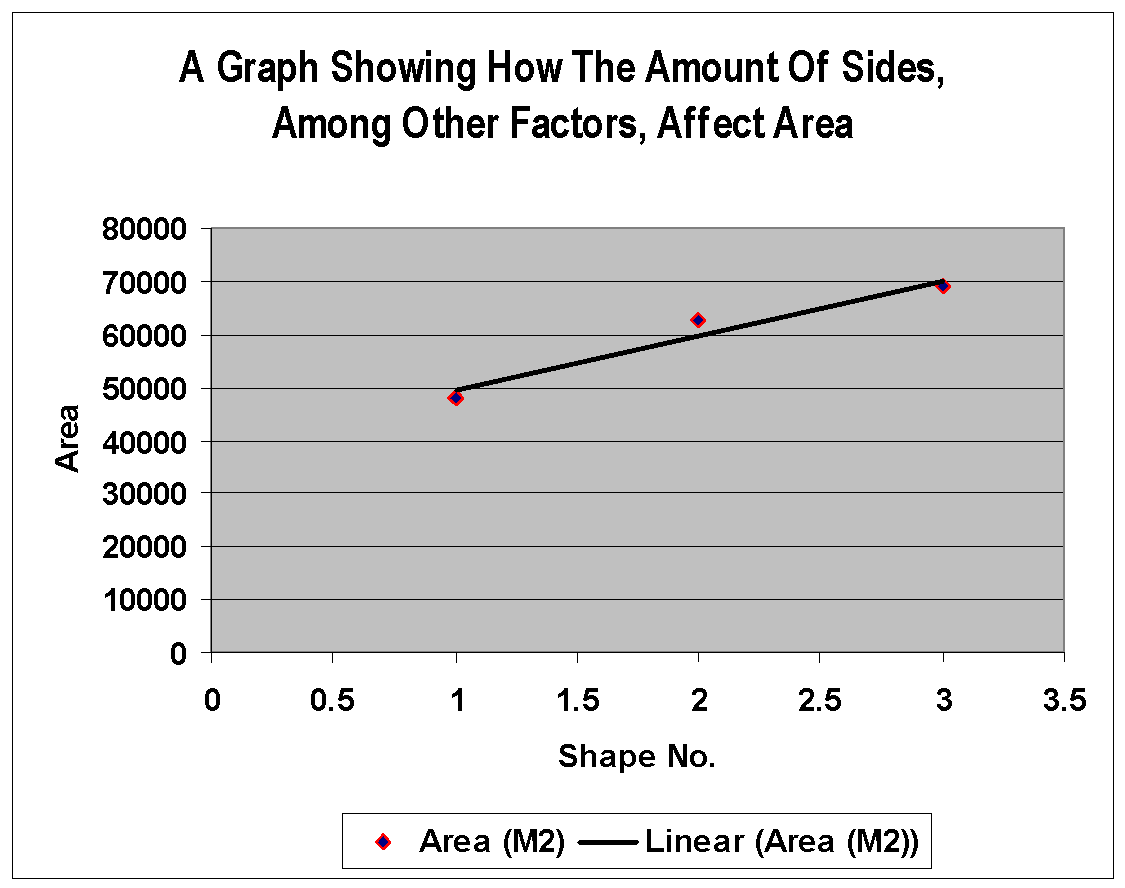 I now feel that as I increase the sides the area will increase, so I should get a larger area with the hexagon. 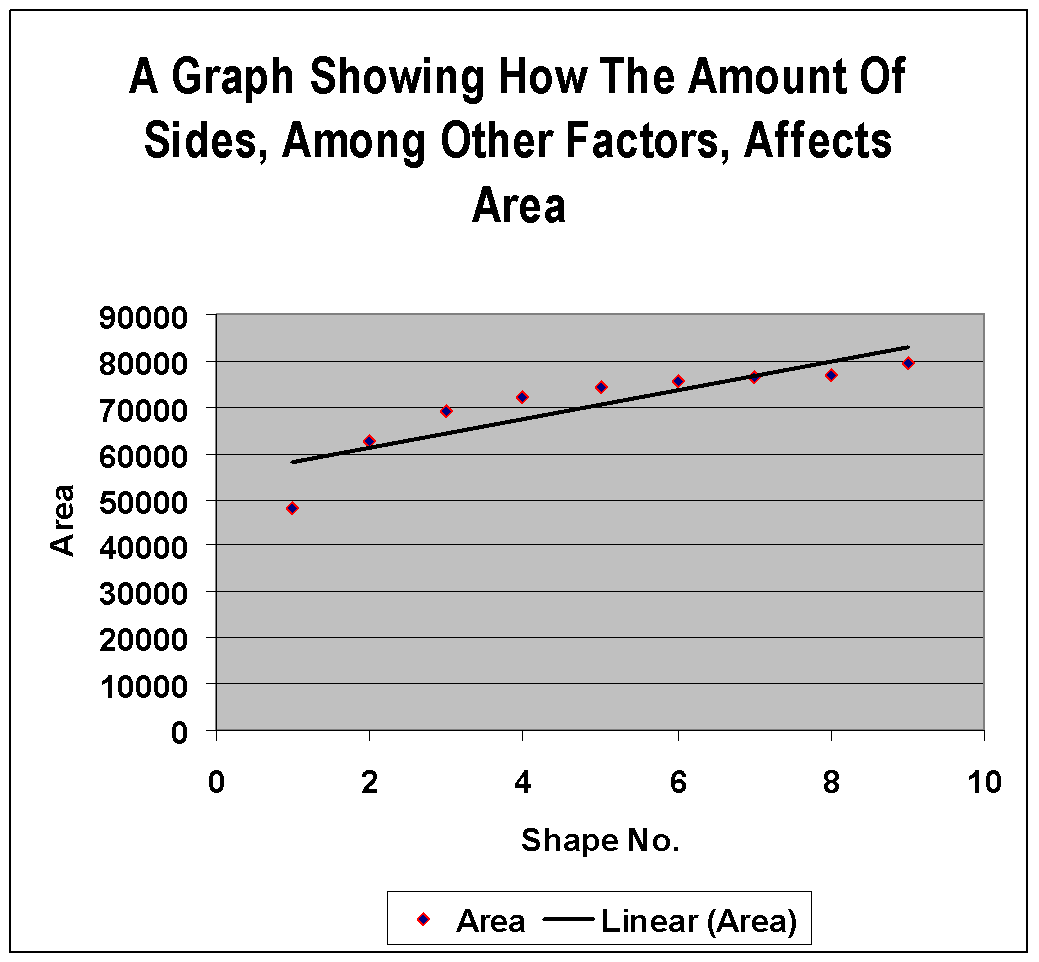 This final graph, basically, shows us that shape no.9, the circle, gives us the largest area. In addition to this, it also shows us a positive correlation in increase of area, as I increased the total amount of sides. From this I can say my earlier statement, which was as I increase sides the area will increase, was true. My hypothesis had already been proven correct by the rectangles and triangles. My aim was to see which shape the farmer could use, to get the largest area. The shape that the farmer should use is the circle, as when I increased sides, the area kept on increasing and because the circle has infinite sides, the largest number of sides available, it also has the largest Area (M2) available.