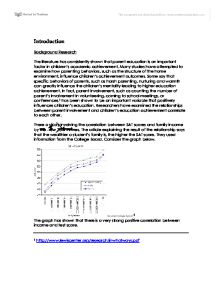 The relationship between level of parental education and SAT scores

The literature has consistently shown that parent education is an important factor in children’s academic achievement. Many studies have attempted to examine how parenting behaviors, such as the structure of the home environment, influence children’s achievement outcomes. Some say that specific behaviors of parents, such as harsh parenting, nurturing and warmth can greatly influence the children’s mentality leading to higher education achievement. In fact, parent involvement, such as counting the number of parent’s involvement in volunteering, coming to school meetings, or conferences.1 has been shown to be an important variable that positively influences children’s education. Researchers have examined the relationships between parent involvement and children’s education achievement correlate to each other.

There a study involving the correlation between SAT scores and family income by the New York Times. The article explaining the result of the relationship says that the wealthier a student’s family is, the higher the SAT score. They used information from the College Board. Consider the graph below. 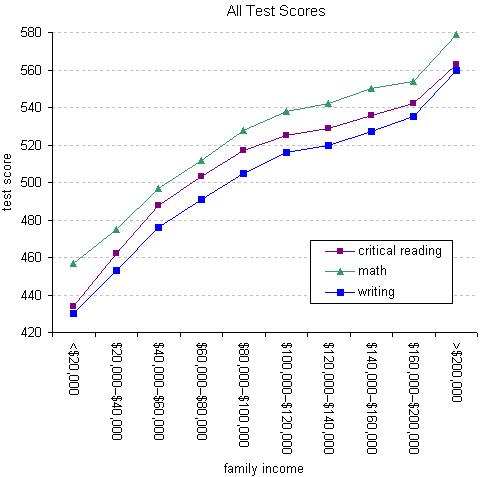 The graph has shown that there is a very strong positive correlation between income and test score.

99.6) for 2010 indicates that there is no significant difference between those critical reading scores of 2006 and 2010.

Consider similar graphs on mathematics and writing comparing 2006 to 2010. 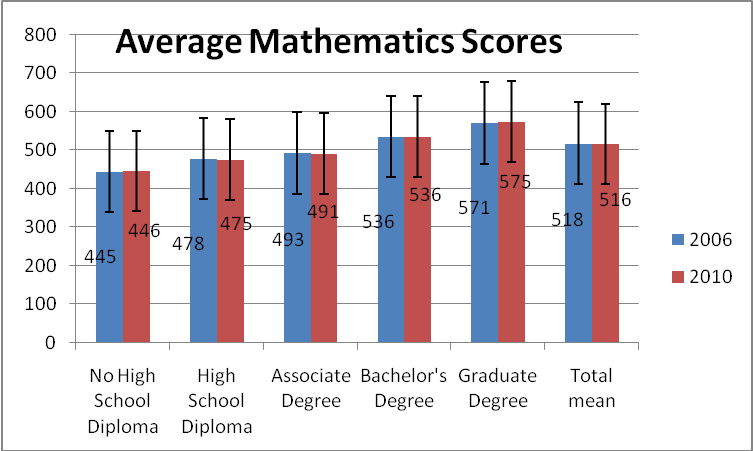 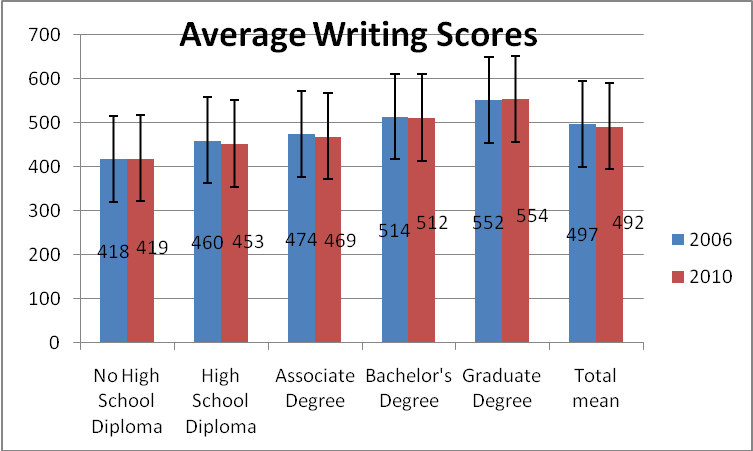 98 for average mathematic scores in year of 2010

Similarly, both of the math and wring scores do not show any statistical significant differences based upon the overlaps of the standard deviation error bars.

Now, since there is not enough evidence to conclude that the highest parental education does not affect the children’s SAT scores, inferential statistics has to come in and play a role in hypothesis testing.

When testing the null hypothesis of independence between the row and column variables in a contingency table, the requirements are described below.

1). The sample data are randomly selected, and are represented as frequency counts in a two-way table

3). For every cell in the contingency table, the expected frequency E is at least 5.

sis and support the claim that the proportions are different. Again, since the P-value which is 0.0271 is less than the significance level a = 0.5, the null hypothesis can be rejected. It appears that the students’ critical reading scores are dependent on the highest level of their parents’ education. 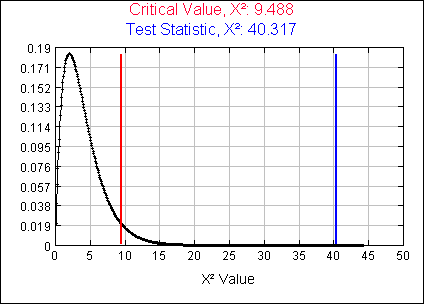 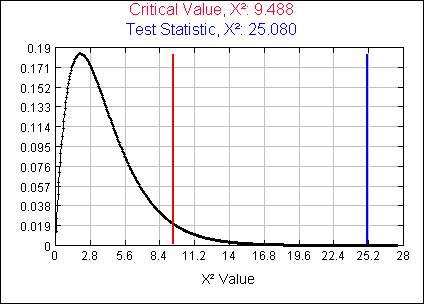 Again, since the all the P-value are very low which are all less than the significance level a = 0.5, and

values are high, the null hypothesis can be rejected. The hypothesis testing of homogeneity concluded that it provides enough evidence to reject the null hypothesis and support the claim that the students’ overall SAT scores are dependent of the highest level of their parents’ education.